You don’t earn nearly as much as you think you do! 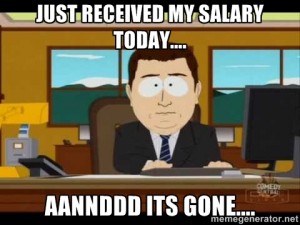 When I was 24 I thought I’d made the big league. Thanks to a bit of luck and thanks to having F-You money, I ended up in a contracting position where I was earning R160 an hour. That meant I made R28k per month since I worked about 176 hours a month on average. This is a pretty good salary today, but 13 years ago to a 24 year old who was still pedaling his bicycle to class and eating vetkoek for lunch just over two years previously it was an astronomical amount of money. More than double what my last salary was before I took my extended F-You holiday. So what does a 24 year old earning such a large sum of money do with all of it? Invest it? Not a chance, I bought myself an Audi.

To my credit, it wasn’t a new Audi, but a used one in what I believed to be a good condition. To my demise, it was about as reliable as a government employees university degree, and due to that, it went through parts faster than we go through finance ministers. In the space of a year I went through a fuel pump, the interior fan, the air-conditioning compressor, and ended the year with another fuel pump. Thank god the last fuel pump was 6 days before the warranty expired, for once. Also, since being one of the exclusive German auto brands everything had a price. Eerily, it was practically the same price for each of those things. Plus minus R6500 a piece. In the space of one year, that luxurious leather clad high speed German sedan had taken R26K out of my bank account, and put into the hands of the four ringed stealership.

If you’ve read a few of these blogs before, you’ll probably have been given an inkling that I quite like numbers. This isn’t a new fascination, and that’s why when I added up my car repair bills at the end of the year, I decided to see how many hours I’d worked that year just to keep my car on the road. In other words, how many hours did I work purely so I could get to work?

At first I thought it was a simple exercise of division. R26000 divided by R160 = 162.5 hours. But once again, the quick and easy answer isn’t actually the accurate answer.

To work out what I really earn per hour, you actually need to go into the small details. If you think about your working day, you’re not in the office for 8 hours a day. There’s the time spent going to the office, and back home again. Considering I lived in Pretoria and worked in Rosebank, that was a huge amount of time, at least two hours a day. Coupled to that was the cost of traveling to work. Even if I ignore the huge repair costs, that car back then was probably costing me R3/km in depreciation, fuel and maintenance. As I was driving 100km a day, that added up to 2200km of driving to get to work every month, or another R6600 a month gone.

There are other costs too. For some reason, even though I was a long haired rock star developer, they wouldn’t allow me to go to work in my normal uniform, beach wear. I could get away without a suit, but I still had to wear half decent looking slacks and a shirt with buttons. I didn’t keep track, but I believe I spent about R3000 a year on clothing in an average year for work. Thank goodness I didn’t study accountancy, they probably spent that every other month! I also went out for lunch every day. Mondays was a Mimmos pasta special, tuesdays their pizza special. Wednesdays were Wacky Wednesdays from steers, and I can’t remember what I did on Thursdays and Fridays, but it was spent out. If I was home I would have made a sandwich, or maybe had some leftovers, so this is also a work expense, and resulted in a waist expanse. At around R30 a day it added up to R660 a month. And just in case you’re thinking I’m forgetting the biggest work related expense of all, well I’m not. I had to pay taxes, and lots of them! I had to dig up a long lost payslip to see what the actual figures were, and they were generally around the R8000 a month mark.

So since you’re smart, you’ve just worked out that I wasn’t actually earning R160 per hour, but only R72 an hour. Well if you worked that out you’re actually wrong. I still had to drive two hours every day to get to work and back, so in actual fact, it was like I was working 220 hours a month, when the traffic wasn’t too bad. That means my actual hourly rate was only R58 an hour. That’s not good at all, I can clearly remember the first time I calculated that figure. I couldn’t quite understand how I was earning 64% less than I thought. Even more frightening was the fact that in one year I actually spent 448 hours working just so I could pay for my car repair bills.

Of course you can guess what happened soon after I realised that. For one, I moved to Joburg so I could walk to work. The second time the fuel pump died was also the last straw on the camels back. The Audi was sold asap and to replace it, I had to break out of the “my next car has to be bigger, better, faster and more expensive than the last car” routine and bought myself superbly dependable Japanese bore-mobile, knowing full well that this car could last me for many, many years without costing two arms and a leg… and a left nut in repair costs. And of course I started to eat properly, I definitely prefer a 6-pack to a barrel.

But enough about me, let’s talk business. If you have some business training you’ll know that you need to consider all the costs of operating a business when you calculate your profit. Failure to do that will get you into big trouble as the Lewis group seems to be finding out lately. Now you need to do the same for yourself. You are a business, and your business is selling parts of your life. Life is a finite thing every hour that passes is an hour you can never get back. Consider yourself the CEO of My Life Pty Ltd.

Now that you know you’re a business, lets work out what your business brings in every month, and every hour in profit. What should we call this new hourly income number? Net income is the number on your payslip, but that’s a completely different number to the one we’ve just calculated. Perhaps we can call it “What I Really Earn”, or WIRE for short. To make life easier, I’ve made you a amazing WIRE calculator (and that’s why this post is late!) to help figure these things out.

So lets put the calculator to work. I’m going to use a friend of mine in this example, Mike Middleclass. Mike is a rather well off person, earning R30k per month. He lives 25km from work, and drives a car which costs R5/km, and has two children in daycare. He also has a housekeeper and a gardener even though he loves working in the garden because he has no time for that thanks to needing to bring in cash. On Friday afternoons he has drinks with some work friends which costs about R100 a week, and about once a month after a particularly hard day he’ll go bowling to take out his frustration on defenseless wooden pins, also for about R100. At the end of the year, Mike and his wife use their 15 annual leave days in the traditional Joburg way, by taking the family to the beach, for which they split the costs.

So here’s the screenshots from Mike’s WIRE calculation: 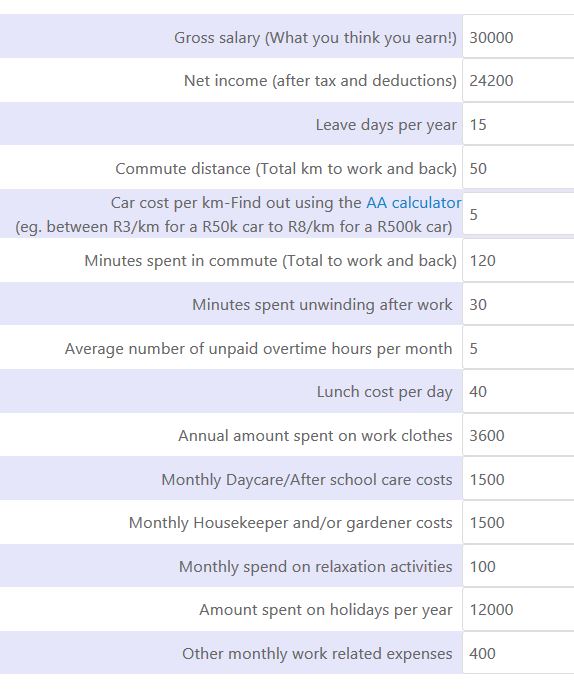 So who wants to see how much Mike actually earns per hour? All of you? Great enthusiasm 😉 here’s the result:

So even though Mike thinks he earns R30k a month or R170 an hour, he actually earns just R14.8k or just R67 an hour. That means in reality, he actually earns 61% less than he thought. Now if he decides to go out and buy a new iPad mini, he knows that it’s not costing him R5000, it’s costing another 75 hours of extra work. Those are hours that he’ll have to add on to the end of his working career if he one day would like to be financially independent.

In a previous blog post I worked  out what habits cost over a 20 year period, but now using the same table, let’s see what those habits cost every month in hours for Mike:

So hopefully Mike doesn’t have a coke habit, as he’d have to work pretty close to four weeks to sustain it. Also if he was considering a sex change, he should know that he’ll have to work another 45 hours a month to pay for waxes and nails. Smoking, aside from costing you your life, also costs you two days a month.

So go and give the amazing WIRE calculator a try, I’d love to hear your thoughts in the comments section.