Only idiots still own Unit Trusts 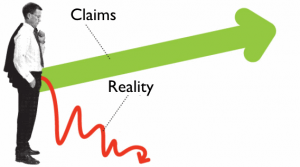 OK hands up, who still owns unit trusts? My goodness there are a lot of you on that side of the screen. Unfortunately there’s one on this side of the screen too. And another in the family, hi mom! We’re all a bunch of idiots. Great big foolish money hating idiots. I’m a completely self taught idiot. Nobody does that anymore, we all use coaches and gurus called financial advisers to guide us into idiocy. Before I graduated to idiocy I only used to save and not invest, so I was a moron then. One day soon I plan to leave idiocy behind and move on to madness. Madness is the Cum Laude of intelligence.

So why is it that I’m calling us a um, what is the collective noun for idiots? If we were American I’d vote for a trump of idiots, but since we live in  Mzansi maybe it should be a malema of idiots, or perhaps a kraal of idiots. Back on track now, why do I think that ETFs are the holy grail and that unit trusts are the financial equivalent of a Kardashian? Well there are two main reasons I dislike unit trusts, and as someone who gets weird satisfaction in pointing out my current and former reasons for idiocy, I’m going to elaborate on both.

It’s not our fault, it’s merely a marketing problem of course. The investment houses have bazillions of dollars to spend on slick TV adverts and radio sponsorships thanks to all the money they make. So while they tell you that “Trust is earned” or that we should “Do great things”, they don’t tell you that active funds don’t make nearly as much as passive funds. I pointed this out rather elaborately in my very first blog post, How to lose money in the stock market, but for some reason, nobody listened. I guess it was early, and you weren’t sure whether of not I could be trusted, or if I was just another smooth snake oil salesman trying to find a way to weasel you out of money. Well now that it’s two and a bit years later, how about we re-visit the whole active verse passive debate. Let’s fight!

In the blue corner we have Historical Evidence, Academic Research and Common Sense. They’ll spout out arguments like the following:

The most recent evidence comes from a September 2015 Standard & Poor’s research report. The report, which presents cross-country comparisons, provides a look at the global evidence covering the five-year period from 2010 through 2014. The following is a summary of its key findings:

It’s actually even worse than that. What’s not shown here is the number of funds that have simply vanished. Closed down because the fund managers were too embarrassed by their performances to keep the losers alive on their books. Over the five year period ending June 30th 2015, of the 160 South African equity funds which existed 5 years earlier, only 126 still exist, just over three quarters. And you can bet your ass that it wasn’t the top performers that went into hiding. So we’ve killed off the weakest, how did the strongest do? Not well sadly. Only 9.09% of the remaining funds actually beat their benchmark over a 5 year period. That works out to around 12 out of the original 160 funds.

It almost sounds like the fight is over, but we really should be fair and hear from the red corner. In this corner, we have the active team, made up of um, well, fund managers and financial product salesman (sometimes mistakenly called financial advisers). They’re backed by a lot of hot air, big glass buildings, and a parking lot full of German sedans. Their drink of choice is Johnny walker blue, as the black simply doesn’t go down as smoothly with their caviar. To get a fair view in this fight, I’ve taken a report from one of South Africa’s largest fund managers, Allan Gray, in an article titled “The case for active management“. Here’s their opening paragraph:

It is popular these days to talk about how difﬁcult the past several years have been for active managers. In a sense, however, active management is always difﬁcult because it is a zero-sum game. For one manager to outperform, another has to under perform. As the Nobel laureate William Sharpe demonstrated succinctly many years ago, both active and passive investors must, on average, have the same return before fees, which must also equate to the same return as the market overall. Layer on higher fees, tax inefﬁciencies and misguided investor behaviour (e.g. buying and selling at the wrong time), and the realised performance difference between the average active manager and a passive alternative can be very meaningful.

Case closed. They’ve hit on pretty much all the points I wanted to make. The market is a zero sum game. For every order to buy a shares, ie someone making a bet that this share will outperform the market, there’s another order going out to sell, ie someone else making a bet that this share will underperform the market. Then of course there are fees, tax inefficiencies and just general bad behaviour by the fund managers. Oh wait, this was meant to be an argument FOR active investing? Perhaps the writers attended the own goal school of literature. I’ve read the rest of the article, but the only positive in terms of active investing is the one quote the article puts in giant lettering, with upper case for emphasis, as well as adding a tweet me link:

Of course, why didn’t I think it was so simple. I just need to figure out which of the 148 out of 160 funds will lose to the market, and pick one of the remaining 12. It’s genius! Is that really the best the active pushers can do? Uh yeah, of course there is evidence that most of us suck, and that we basically never win, but this time round it’ll be different, I promise!

And yet somehow I fell for their sales pitch in early 2012, signing up to the FOORD equity fund, and continued giving them more money throughout the year. For the past few years I’ve been told in quarterly statements about how well they’ve done, and how proud they are to be as good as they are. They can be proud I guess, over a 5 year period, ending 31 December 2014, they were the top general equity fund in South Africa. Seems I did the near impossible, and picked the best fund in the class! Could I do it again? I wouldn’t put money on that…

Now considering I switched to the Satrix Indi ETF in 2013, and more recently the Dividend Aristocrats ETF (sometimes called the Div Trax), I’ve recently done a few comparisons as to how my super smart active fund has compared. Here’s a 5 year chart comparing the Indi with my FOORD equity fund:

Satrix Indi vs FOORD equity 5 year graph, no points for guessing which line is the passive fund

In 5 years the indi did 184% while FOORD did 125%. Hmm, so that stupid passive fund only managed to beat the country’s smartest active fund by 59%. Oh dear… Note I deliberately left off the last few months, because with the sale of South African Breweries, the Satrix indi just took off like a cat seeing a cucumber, and that wouldn’t have been a fair comparison. The Dividend Aristocrats is still quite new, so results shouldn’t be taken as an indicator of the next 5 years, but just for fun, here’s a chart comparing the Indi, the Div Trax and FOORD for the 12 month period, also ending just before the SAB sale:

Indi vs Div Trax vs Foord equity over a year

As you can see, this year some of my money earned over 9.5%, but a rather large chunk sat on only 2.31%. How much did I pay for this spectacular under-performance?

Well that brings us onto the second problem I have with unit trusts.

2) We’re idiots because we pay more to earn less

During the past 35 months that I’ve owned my unit trust, on average they took 1.7% of my money every single year. This doesn’t sound like a huge amount, and in unit trust terms it isn’t, some funds charge two, three or even more percent, using a charge sheet and performance bonus calculations so complicated, it takes a 30 minute consultation with an actuary to try and decipher it. What do my ETFs charge? Well put away your calculator, and hang up on the actuary. A simple google search points out that the Satrix indi charges 0.45%, while the Dividend Aristocrats charges 0.39%. The RMB top 40 (now called the Ashburton top 40) charges a miserly 0.16% (don’t buy the Satrix 40, it charges 0.45% for doing the same thing)! If we had access to Vanguard funds, we could get that even lower, their cheapest fund works out to just 0.05%.

I’ve previously done a whole post on fees, but thanks to a recent article on Moneyweb, I have a new example of how these fees rob people. I’ll ad-lib it to keep it brief:

We’re retired idiots, and have R4.2M invested with a snake oil salesman. He’s told us we can withdraw R37 500 every month, and we follow him blindly even though we only spend R17 500 a month. The leftover cash we ensure we lose by putting it in a bank account, which now has R400 000 being eaten away by that hungry beast called inflation. How can we stop being such idiots?

This brings on a equally moronic reply from someone who works for a fund management company. Nice work Moneyweb, send the sheep to the lion for help. Here’s the brief of his reply:

Then onto the gold in this reply

In addition, you should ensure that your costs are appropriate for an investment portfolio of this size. By no means should this figure exceed 1.75% per annum.

So the advice from the shark is that this poor old couple should give R73 500 a year, to a fund manager, and they can keep R117 600. That means they give their fund manager 63% of the money they keep to live on, or 38.5% of their total potential income. What the hell do these fund managers do to deserve 38.5% of an elderly retired couple income? It’s simple, as I said in point 1, they simply made less money than the market average. How anyone can do this, or advise others to do this is beyond me, it should be illegal.

But like I said, I fell for it too. I am an idiot, but a recovering one. Not quite completely recovered yet, but I plan to be soon.

In South Africa, there is a vast tax difference on being classed as a trader or as an investor. Traders pay income tax, while investors pay capital gains tax. Capital gains tax is the one you want to qualify for, because the first R30 000 in growth is completely tax free, and the rest is taxed at one third of the income tax rates. The rule is quite simple, to qualify for capital gains tax, you need to keep your funds/stock/ETF for 3 years plus. As my last purchase of FOORD was in December 2012, I will soon be dumping it all in favour of a low cost ETF.

It’s not going to be one of the two listed above though, I’m going for lower cost and greater diversity. You’ll just have to wait for a future post to hear which one it will be…

So don’t be a chop, tell your adviser to go fund himself, and buy that ETF instead.

*Note that not all unit trusts are actively managed with high fees. Some in fact are passive index trackers, and have fees similar to ETFs. In America Vanguard operates like this, with their fund fees being the same as their ETF fees. In South Africa, as far as I know it’s only Sygnia that has funds like this.