Er I’d better rephrase that statement. You see a short while ago I had a conversation with my extremely beautiful significant other. Not only is she beautiful, but I have a suspicion that she’s smarter than me too, and a successful business woman to boot. Sometimes I wonder if my only contribution to the relationship is my ability to swing tools around with abandon. And that ability often leads to taps with broken handles, or holes in the wall where there should be wall. I’m already on thin ice, and now possibly this post has me jumping up and down on said ice, in stilettos. It’s not a pretty sight…

Anyway, back to the conversation. You see my sexy girlfriend drives a cute little mini. It suits her perfectly as they’re both small, rather cheeky with a sexy rear end. Thing is though, this is her second mini, and other than the colour and interior, it’s pretty much just like the first one. So why is there a new one? “Well it cost pretty much the same as the last one!”… And now to deflect any venom I may encounter, I’ll switch to another example.

I have a good friend in the office, to keep work civil I’ll call him Barry. Barry is a great guy, gadget freak and a huge Audi fan. He had a near pristine A4 1.8T, which he loved driving. It wasn’t really his of course, it actually belonged to the bank, but that’s a minor detail. Anyway, a little while back a great big Audi dealership opened up just down the road from the office. They had a gorgeous red R8 in the window which drew men in faster than an all you can eat buffet to a parliamentarian. 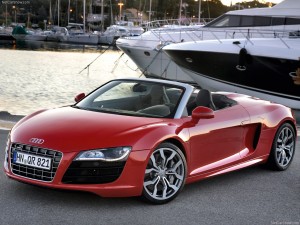 Now as a certified car nut I could appreciate the R8, as could Barry, but then his eyes caught sight of a sleek A5 coupe in a gunmetal grey color. It looked very good I must admit, I briefly decided my house should be painted gunmetal grey. A few seconds later, the enterprising salesman appeared, with a crisp Armani like suit and big white teeth that looked like they once belonged to Tom Cruise. He spotted the creatures weakened by mechanical lust and made his approach. “Good looking car isn’t it”, was his opening line. “You know it’s turbo charged, puts out 155 Kilowatts and enough torque to restart a small planet”. He had us at turbo… It doesn’t matter that 99% of humans have no clue what it means, we still go weak at the knees at the mere mention of the word. “One day when I win the lottery” I told Tom. “It’s actually not that much, I could give it to you for under 450”. Now since I didn’t think he meant 400 under 450 I responded with a half hearted “not bad” and the two of us made our way to the door.

A few days later I went past Barry’s office again. He was telling me how much he loved that grey A5. Now I know Barry’s financial situation quite well. He is what I would describe as 3 paychecks from bankruptcy. Like so many other South Africans who live beyond their means, if he lost his job, bills would go unpaid straight after the retrenchment package vanished, and the repo men would arrive in force. With that in mind I tried to discourage him from a purchase he would likely not be able to pay should there be even a minor glitch in his income stream going forward. “It’s a great car, but I would prefer it in white.” I lied. “Pity it’s so expensive, but in a few years time you could probably pick up a used one quite reasonably, after some other unlucky sod has lost a couple of hundred grand”. That last one was true, you can buy that model for under R300k today, a year or two older and they’re in the early 200’s, but either way I wasn’t expecting his next reply. “I bought it today… The salesman gave me a great deal so I’m paying almost what I was with my last one…”.

My foot was well and truly planted in my mouth. Far down. I managed to feign some excitement with the appropriate oohs and aahs, even requesting a drive immediately, but I could see I was responsible for removing some of the shine from his bright face. So let’s look at why I thought it was such a bad deal.

Now if you’re handy with a calculator you’ll quickly go 72 X 5800 = R417 600 and start scratching your head. How the hell did the salesman work out a deal where even if there was zero interest you end up paying less than the total price of the car. What financial voodoo did he do? The answer lies in a very clever financing option called a balloon payment, or a residual. In this case he added on a 40% balloon payment. What this means is that after paying for your car for 72 months, you still owe 40% on it. Think of it as a deposit you pay at the end of the loan rather than the beginning. It’s a wonderful thing that lets you buy a car you possibly can’t afford now, in the hope that after 6 years you should be able to afford it. Optimistic financing! You can pay this cash and then the car is yours, but sadly for most people, including Barry, there just won’t be another R176 000 lying around which means either selling the car to try cover it, or refinancing that amount for another few years.

Now let’s assume he kept the A4, invested the difference, and kept investing what the new car would cost after it was paid off.

Payment on A4: R4200 (how that’s almost the same as the new one takes some imagination!)
Payment terms remaining: 36 Months (halfway paid off)
R1600 invested in the Satrix Indi (which I did encourage Barry to do) for 36 months gives you: R91 800.

A million rand extra for driving his current A4 intead of a new A5! Incidently a million rand would buy a pristine used R8 cash… But wait, there’s still another option.

In life there are a few million dollar decisions. Choosing the right car is one of them, I may write about a few others later. When someone asks what a car costs, they’re always given the monthly payment. What most people fail to see is that the monthly payment, especially on an expensive car isn’t nearly the worst of it. The single biggest cost in owning a vehicle is the depreciation, and expensive cars sure know how to depreciate! The AA has a great calculator you can try here. The results for the A5 came out at a fairly sobering R6.56/km. Barry drives about 2000km a month, so this car will cost him (R5800 + R13 120 in running costs) R18 920 a month, plus a balloon payment of R176k. You might say hold on, it’s on a motorplan, but believe it or not the bulk of those running costs comes from depreciation! Of course depreciation seems invisible, but one day when you sell it’ll be there, waiting, and you’ll be left to wonder where the lost cash went. 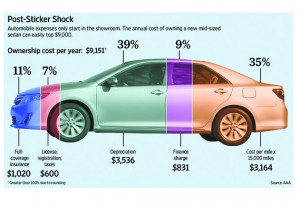 For some more interesting calculations, I’m going to assume the A5 never had a balloon payment, that would make the monthly payments R7500 per month. We’ll also assume that Barry would replace his car after the 6 years, which is probably a little long considering how often South Africans replace cars. So now let’s assume Barry took some advice and decided to just change his car to get away from the three months to bankruptcy. A 2 year old Toyota Corolla may be as dull as a Sandton soccer mom’s cappuccino conversion, but at R130k they’re pretty good value, and quite likely to last quite some time and be cheap to run. The AA rate on one of these is also around R2.80 per km, as most of the depreciation has already taken place.

Now you can’t invest the lack of depreciation, so let’s work with the monthly payments. Paying in the difference on this and the R60k settlement from the A4 would mean Barry could pay this off in 12 months at R6400, still less than the R7500 for the A5, with a mere R6500 going to interest. Now let’s run the new numbers if the difference was invested:

So we have an extra R770k. Ignore the fact that it’s lower than the A4 savings amount, that’s because we shortened the loan term from 9 years to 6. Now Barry is in his early 40’s, we’ll say 42 for the calculation and give him 20 years left to work and will buy a car every 6 years.

Age 62, retirement is here, how are the finances?
If we followed the A5 or equivalent route, all that we’d have left is the trade in price of the current A5 which if we’re lucky will be around R600k. Then for the last two years fear has made us invest the R9500 we used to pay to the car, leaving us with another R275k for a total of R875k.

On the other hand, if we followed the reasonably priced car route, we’d be on R13.8 million (R2.668m plus R9.5k per month for 8 years at 19.6%), plus another R170k if we decided to trade in the old car. The difference then in choosing a reasonably priced car and a “nice” car is about R13 million, slightly more than a million dollar decision. Nothing else in your life has changed except your choice in car, but you can retire fairly stress free now.

Addendums:
*The lottery is just a tax for people who didn’t pay attention in maths class.
*My significant other who, with only minor editing, allowed me to use her as a part example here is far too smart to go for a balloon payment. She also works 200 meters from home, so walks rather than drives saving large amounts of cash in vehicle depreciation. And no you don’t get to see her cute rear end.
*I recently sold a 1977 Fiat X19 with a supercharged toyota twincam engine (told you I was a car nut) for R23k. I bought it for R30k, and spent another R35k over the last3 years maintaining it. Big loss, of R42k, but fortunately I only did it once, many people lost many times that every few years. 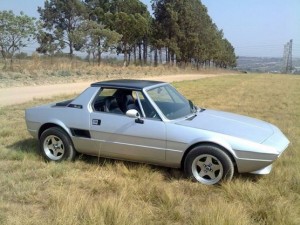 This was mine. Love the way it looked, and the way it went, when it went. I think it spent more time in the workshop than with me.