The actual cost of NOT providing free education 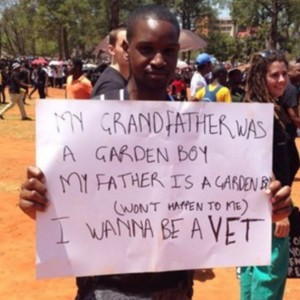 So, let’s look at what the impact is of the whole University fee issue. You see, the students are rightly upset that they have to pay far too much in University fees. The government on the other hand is saying there just isn’t money to give free tuition, and they right, it’s pretty hard to find money when you’re throwing so much of it away on things we really don’t need, like the arms deal, nuclear power stations and of course Nkaaaanndla.

I know I’ve said it before, but for some reason it just seems that governments don’t understand basic finance. Firstly you need to make sure you spend less than you earn, and then you need to invest some of the difference. It’s my belief that the #feesmustfall movement is simply the governments lack of understanding around making an investment in it’s future. Delaying gratification now for huge rewards in future is ground zero for investing.

Naomi is a young girl about to finish school in the Eastern Cape. Unfortunately for her, she lost out on the birth lottery, and came into this world to join a poor household. Now say what you like about hard work, a good mind, or any of the other aspects to a person, your chances of having a successful life are far, far lower when you start off in a poor household.

So while the odds against someone poor succeeding are pretty slim, it’s even worse if you’re from the Eastern Cape. You see only 65% of people who wrote the matric exams in that province passed. The percentage that passed with an exemption to go to university is way lower, just 20%. That puts our hard working Naomi into a very small group of successful scholars.

Without any funds for her to go to a University, Naomi would currently need to try and find a job. The Eastern Cape is a province with a 29% unemployment rate, but that’s the overall rate. Naomi’s chances are actually significantly lower than that. If you separate the youth out of the overall group, the percentage unemployed is actually 63.1%.

For someone like Naomi, who has no work experience nor any tertiary education, it’s a fair bet to imagine that she will not find a job, and will become one of the many young people in South Africa who will eventually end up costing the government money through various forms of social grants. Even in the rare case that she possibly was able to find some type of unskilled work, it’s likely that she wouldn’t earn enough to be a net tax payer, and would quite possibly still require a social grant, just like sixteen million other South Africans. It’s not much of a stretch to assume that Naomi would have two children and therefore be a beneficiary of the current grant, adding up to R660 a month. Over an 18 year period, increasing the grant for inflation, she’d end up costing the government R244 772,77 in child support grants. Then on reaching 60 years old, she would draw a government pension of R1420 per month, and assuming she’d live to 80, it would cost the government an additional R626 826,47 for a total of R871 599.24. This is also ignoring any other indirect costs such as state medical or RDP house etc.

On the other hand, if we had a government with some forward vision, things could be completely different. Naomi could be given free tuition to study in a field of her interest, which as she is gifted with numbers just happens to be accountancy. Having come this far, she’s likely to be very motivated and would work hard to graduate, after which she is far more likely to end up in a career. In fact figures show that for someone with a tertiary education, the unemployment figures are drastically reduced to just under 10%!

As careers progress, and increases are given, she would likely very soon repay the governments tuition grant in taxes. Continuing to be more successful, it’s likely that over the course of her career, she’ll and up paying many times what her tuition costs.

Naomi was happy to receive a rather average salary in her first job. Articles don’t pay very well, her starting salary was just R8000 a month. From that, she would pay R4023 in taxes in her first year. Still a long way from paying back the R300 000+ in fees sponsored by the government. That was only her first year though. If we assume a 28 year working career taking her to 60 years old, and an ultimate salary high of R50 000 a month, which to be honest is probably quite conservative given the potential salary in her field, plus her previously disadvantaged status, she could quite possibly end up earning far more.

So what would she ultimately pay back in taxes if her career followed that path? Well here’s the table, note I’ve removed inflation from the numbers to give the answers in today’s Rand: 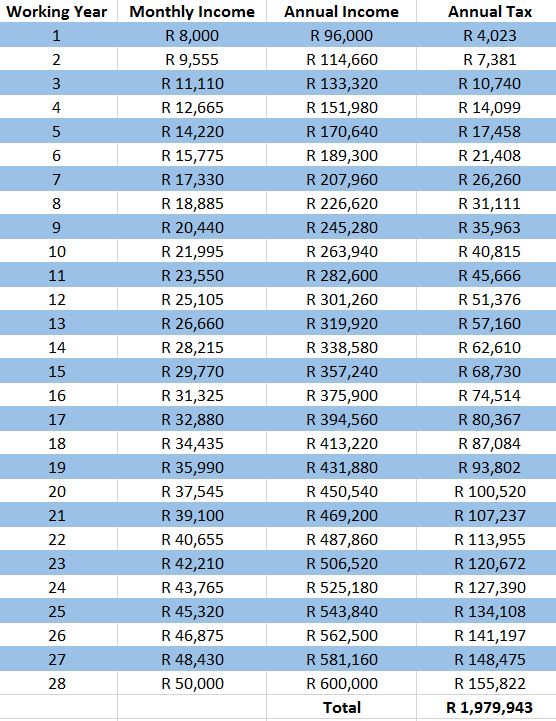 As you can see, the potential cost of not offering free tuition is significantly higher than that of offering free tuition. To be more accurate, we need to add the R871,599 which would have been spent on social grants, and if we conservatively assume that she spent 20% of her take home pay on items requiring VAT, that would add another R217,328 to the total. That leaves us with a dead loss of R3,068,870 for not providing free education! In other words, it’s ten time more costly not to drop the fees than it is to keep the fees. That’s why my suggestion to the government is to seriously consider offering free tuition. Not only for the sake of the potential students, but for the sake of our economy. Otherwise I’m really not sure where we’ll find the extra three hundred and sixty eight million hundred and seventy eighty thousand rand and ninety needed in our budget in a few years time.

If you wanted to play devil’s advocate you could actually consider that perhaps the government is aware of this. After all, our government only spends 12% of our education budget on tertiary education. This is way lower than the global average of 19.8%, and lower still than the African average of 20%. There could be a bunch of reasons for that, but could it be perhaps that people who enter Universities are probably highly likely to ask questions about bad governance, and maybe even shock horror, vote for party not based on tribal or historical grounds.

If that’s the case then the move has completely backfired. For once it seems all sectors of society are highlighting governments failure as a single voice. It will be interesting to see next year if the votes reflect this. I have a feeling it just might.