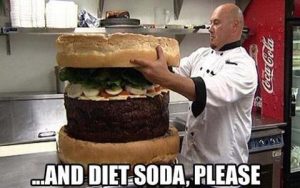 I have a machine that prints money. It’s legal too, and operates on nothing more than cheesecake. That’s right, nothing but pure cheesecake. I have two others that operate on a combination of cheesecake and a teeny tiny amount of electricity. My brother has two of these, and I’m buying one for my wife now too so we can use ours together. These machines are really quite common, I’ve been trying to get Orca to buy one that would run on beer, since he often has a surplus of that 🙂

My fastest machine of this type, the one I use most often, prints about R2000 a month. It was quite expensive, I’ll admit that. In total I spent R36 000 on it, but other than about an hour of maintenance every other month, it runs happily spewing out nearly R24 000 in cash every year.

Yes, this magical machine I’m talking about is my bicycle, and it’s about time too. You see you actually can’t call yourself a modern personal finance (PF) blogger and not wax lyrical over your love of bikes to anyone who wants to hear, and those who don’t. Up to now I’ve just been a poser, a wannabe, a rebel without a clue, but now I’m coming out of the closet, and I’m ready to say something the 18 year old me would never have thought possible:

Phew, that was actually a lot easier than I imagined, and I really do feel quite liberated now.

Time for an aside: In the investing olden days, the only reason people wanted to own a share was because owning shares meant you got paid money. As a part owner of that company, (yes every shareholder is actually a part owner) part of the profits belong to you. This is called a dividend. If you wanted to know how much money you’d get paid for your simply owing those shares, you could look at something called the dividend yield.

This is basically the total amount of dividends paid over the last year, as a percentage of the price for one share, or how many Rands’ worth of income you could get by spending R100 on that share. MTN for example is trading on a dividend yield of 8.8%, so if you had R100 000 invested in MTN, you’d get R8 800 in dividend income per year. As another example, South African Breweries for example has a dividen yield of just 2%, and Vodacom is sitting at around 4%. One of the most successful companies of all time, Google, has never paid a cent in dividends, and probably won’t any time soon.

Now with those numbers in mind, if someone offered me an investment that cost R36000 to buy and would pay out R24000 in dividends a year (67% a year) in sustainable dividends, would I buy it? You bet I would. A 67% dividend is so high it ought to be classified as a Ponzi scheme, but I’m not talking about some crazy soon to crash pyramid money scheme, a bicycle really is an investment that gives those returns, and is likely to continue doing so for many, many years to come.

You can get them for a lot cheaper too. R5000 is plenty for a good used model, and depending on your circumstances, and how often you’d use it, you could easily get a 100% or even higher dividend yield.

Now isn’t it time you gave bicycles a little more consideration. Think back for a while, how many Facebook posts have you seen along these lines:

45 minutes to drive 6km, I’m ready to murder someone %$&*$#&
or
Damn traffic lights, I’ve been sitting in the same place since 5 frikken o’clock…
or
A tortoise just overtook my car, and it had a broken leg!

If I had a Rand for every time I see some of those messages, I’d probably have, er, 12 or so Rand. Not quite enough for me to give up working, but it is a lot of complaints to have to read. I’ve never posted one of those, mainly because I’m not a whingeing Facebook crybaby, but also because I can’t remember the last time I took 45 minutes to drive 6km, or had to wait in a long queue when the lights are out, or sat in traffic going nowhere slowly.

Nope for the last 9 years of my life, just like for the first 17 years, my primary source of transport has been the two wheeled. I often wonder how I managed those middle 10 years being frustrated, while burning through cash as if it was petrol.

Two wheeled transport doesn’t only save you hours of time every week, it also saves you large amounts of money. As you saw in what has become my most liked article about how a bad choice in cars can cost you a million dollars, driving is a seriously expensive habit. Riding on the other hand, provided you don’t buy an idiotically expensive bike, is a very cost effective and often a negative cost habit.

My car, which is so cheap even my friends tease me, still costs R3 a kilometer to use. When I was driving from Pretoria to Johannesburg every day, I was doing 2000km a month, and therefore spending R6000 a month, to go to work where I’d earn R18000 a month after taxes. One third of my income was vanishing just by going to the office. I have friends who do 2000km a month in cars that cost R8/km and more. They’re spending upwards of R16000 a month to sit in traffic. They either need a bike or a psychologist.

It doesn’t even have to be a cheesecake powered bike. My first bike post growing up was a small Yamaha motorcycle that cost me R18000 to buy, and under R1/km to run. It paid for itself in a couple of years, and if I subtract the loss I had after selling it, it meant I was R14000 better off for having owned it.

After that I built my first electric bicycle for R15000 including the 2nd hand mountain bike. It runs on just 1c/km in electricity, and now it’s commuted me along for over 7000km, paying for itself and putting an extra R7000 in my pocket. I’ve also been offered more than the R15 000 I spent on it to part with it, but I’ve promised it to my son when he’s old enough to handle it.

My newer, bigger and Africa’s fastest bicycle cost me, as mentioned above, R36000 so far, but since I’ve just passed the 13000km mark, it has also paid for itself with an extra couple of grand in surplus. I’ve also literally had strangers hunt down my phone number for this one, offering me crazy amounts of money to buy it, but it’s not for sale people, you can’t give me enough money for me to sit in traffic for two hours a day. Well you could, but we would be talking millions and not thousands.

There’s no need to be a gung-ho motorcyclist, or an electrical guru either. If your commute is in the single digit distances all you really need is something with pedals and a few flashy lights and you’re well set. In addition to the time saved, you’ll have a much healthier body, a slimmer waistline, and a much happier marriage, if you ask my wife what I’m like after a few days when I’ve had to take the car for some horrible reason.

Even if you live further away, or if you really want to keep your love handles, you can always buy a cheap little scooter. A good used one can be bought for very little, and they really are fun to ride, at least until your friends find out! If you drive a monster 4×4, you’ll probably find that your cheap two wheeled transport will pay for itself in under a year, and after that you’ll have plenty in savings to invest so you can skip the commute altogether a few years earlier than planned.

Here’s my example of what my bike will earn me, if I keep using it as I have until I reach my companies official retirement age. That’s over 2 million Rand in today’s money I’d get paid for staying healthy, avioding traffic, and just having a generally good time on two wheels.

And don’t be too concerned about dying in an accident. Research has shown that the health benefits significantly outweigh the accident and pollution risks. One study looked at half a million people who switched from cars to bikes, and found that on average, switching to a bicycle adds between 3 and 14 months to your life, while the risk of an accident or picking up health concers from pollution reduces it on average by just 5-9 days.

Just don’t be one of those to drag the average down please, most deaths are from head injuries to helmetless riders, please wear a good helmet.

And to finish off I now have an advert. I’m planning on buying a new, folding bike so I can take it on all my work and pleasure trips, but first I need to make sure I stick to my current 3 bike limit. Here’s the ad I posted in a few forums, but the bike is still available: 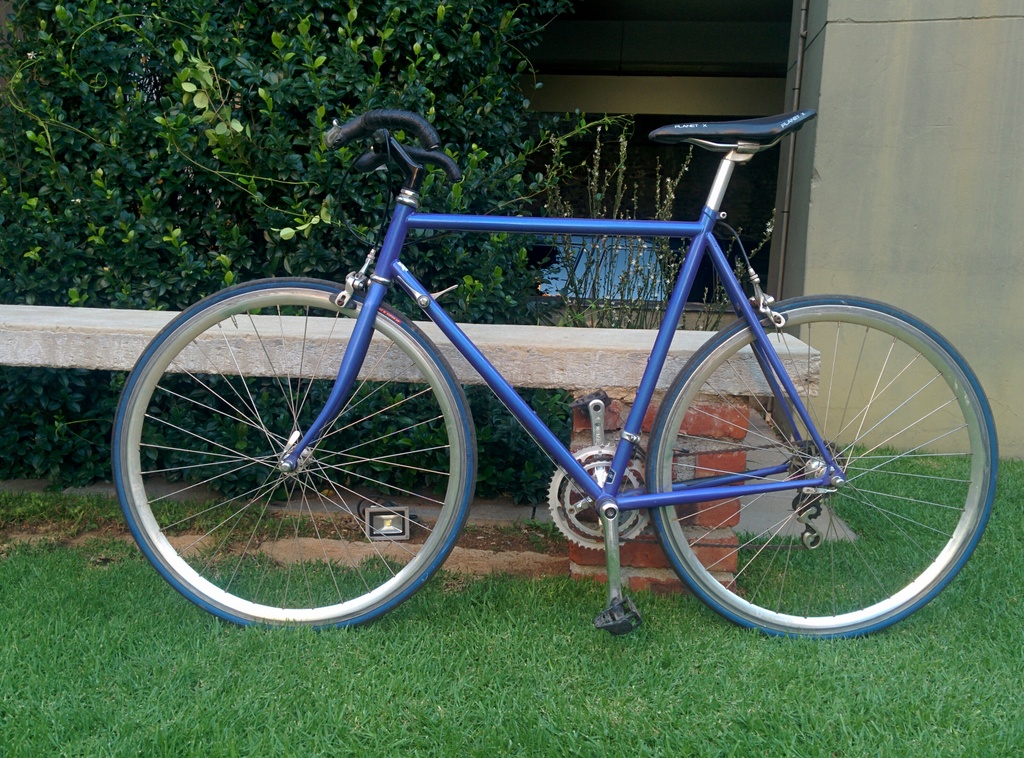 Meet Violet, I can’t remember her full name, and the stickers have all long since been removed. We met as a schoolkid in the 90’s. I had big dreams about being able to go fast enough to fly like the kid in ET. It never happened, and now that dream lies shattered in a dark recess of my mind.

About two years ago I took her to the Whippet bicycle company. They took my Violet for some surgery, gave her a stem lift, a handle bar tuck, new tubes tires, a complete service and a few other look pretty bits. She was beautiful and we immediately hit it off again.

Sadly as things tend to happen we’ve grown apart, and so I had to have a serious heart to heart with her.

Me: Violet, we need to talk?
Voilet: That doesn’t sound good, what’s going on?
Me: I don’t think we should keep seeing each other.
Voilet: What, how can you say that, what’s wrong with me?
Me: Nothing, you’re beautiful, you’re the best bike I know. But it’s not you, it’s me, I just can’t be the man you need.
Voilet: What is it, is it my gears? Don’t I go down enough for you? Is it my handles?
Me: No, your gears are just perfect, you go down more than enough for my needs, and I love your handles.
Voilet: You ***hole, I know what’s going on, you’ve been riding other bikes haven’t you? I’ve seen they way you stare at all those mountain bikes when we’re out. Own up you loser.
Me: Yes OK, I admit it, there is someone else…
Voilet: Who is she? Are her tubes bigger than mine? I can’t believe you, you bastard.
Me: Her name is Kona, she does have lovely big tubes and tires. I never planned this, but we, we fell in love.
Violet: I hate you. You never were the man of my dreams anyway, I’ve always wanted someone with a beard. And since we’re being so open, guess what. I let your brother ride me quite a few times.
Me: That’s it, we’re done, and I’m going to post that naked picture you sent me online.
Voilet: Do it, I know I have a really sexy frame, I don’t care if the whole world sees it!
Me: I really did love you, so I hope you find happiness with someone else.