Our government really doesn’t want us to invest locally

We really need investment in South Africa. It’ll create jobs, stimulate the economy and drive innovation which could one day cure AIDS, Malaria and Cancer. It’ll even end the current scourge of crime we’re suffering so much under. But be warned, as fantastic as that sounds, if you do invest in South Africa I’m going to punish you.

Yes, I’m going to punish you, hard. And not in the 50 shades kind of way but really miserable pain. Exclusively to your rear pocket, where you carry your already heavily punished wallet. Of course I will still punish you for investing internationally, but it’ll be so much worse if you keep your money in SA.

But please, ignore the fact that keeping all your investments here is bad for your wealth, terrible diversification and completely ignores the efficient market hypothesis, just invest locally, it’s the right thing to do. Like paying your TV license so Hlaudi can get his next bonus or raise. Or both.

Well that was motivational. It’s also true, apart from our R30 000 a year that we can put into our tax free savings accounts, our government actually doesn’t want us to invest locally. If they did, they wouldn’t punish us for doing just that. In fact we are punished FAR more for investing in South Africa than we are for investing outside of South Africa.

If you’re thinking it’s got anything to do with the idiotic policies government keeps coming up with, or the way one part of the ANC is fighting with the other so that it can keep draining wealth from the taxpayers to themselves think again. It also has nothing to do with the fact that we could be staring a recession, and maybe also a ratings downgrade into the face.

This time it’s all about mathematics. Maths doesn’t have any grey areas, and you can’t argue your way out of a wrong answer. It doesn’t lie, or make claims that can’t be proven, and because it didn’t require me putting in countless hours trying to memorise things, it was one of my favourite subjects in school. So what does this have to do with investing either locally or overseas?

It all comes down to wha 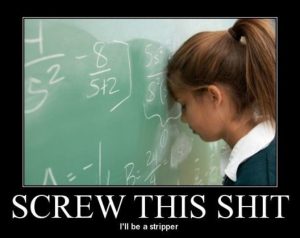 t is called Capital Gains Tax (CGT). I say called because in reality capital gains tax has far more to do with inflation than it does with capital gains as I’m hoping to prove soon with an example.

In this example we’re going to assume two things. The first is that you have one million rand to invest. The second thing we’re going to assume is that you don’t read this blog very often, and don’t bother doing any research before you invest. If you had read this blog you would have come across my articles here and here moaning about how poor my returns had been in the property market. I always get arguments in the comments of those posts, but if you had done any research, you would have found that on average, property barely increases in value any faster than inflation.

And now a number of you property investors are already planning on jumping right down to the comment section to give me a piece of your mind, which I really don’t mind as it means at least someone reads these posts, but before you do you should probably read this study on how the US property market only increased by 0.1% per year over inflation between 1900 and 2012. Still want to argue? Then please read about the Herengracht index. Thanks to the supremely anal record keeping of the dutch, a finance professor in Holland was able to compile the Herengracht index on a very special section of real estate.

The property along the Herengracht canal in Amsterdam has been THE property to have since it was first built in 1628. Unlike Sea Point, Hillbrow or the famous Eloff street which has the prime spot on the Monopoly board, this stretch of land never went out of fashion. The study at first looked at the time from 1628 to 1973, but later extended the period to 2008. Guess what happened in that time? Well the real value of the property doubled. Sounds good doesn’t it? The problem is, it took 380 years to double, meaning the annual growth rate was just 0.1% above inflation yet again!

Do you see where I’m going with this? If you take the average growth of property, and then add the expensive costs for buying and selling, you’ll be lucky to end up with any real growth at all. Add in the maintenance costs, and the ever increasing rates and taxes, and you’ll be lucky to avoid negative real growth. This will make my calculations a lot more simple as I can assume a 0% real growth, and that can take me back to the the real point in this post.

So what would happen if you invested in a property in South Africa worth a R1 million only to sell if 20 years later? Take a look at the table below: 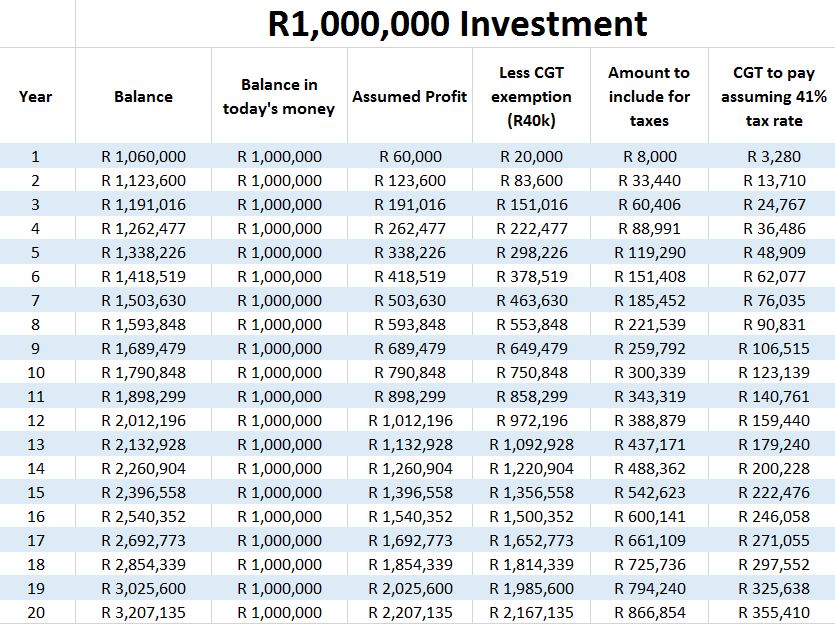 CGT to pay on R1 million over 20 years

What I’ve done above is increase the value of the property by 6%, the same as inflation. That’s the reason the second column never changes it’s value. In real terms this property hasn’t gone up at all, yet after 20 years you’re still forced to hand over R355k to SARS on what they call capital gains tax, but what is in reality just a tax on inflation. I don’t think that’s really fair considering the fact that the government is one of the main causes for the inflation.

Now let’s take the same value of R1 million, and invest it in a currency with far lower inflation, the US dollar. Sure we still have to abide by the stupid non-inflation indexed tax laws, but because the inflation rate there much lower, the effect of inflation is far lower too: 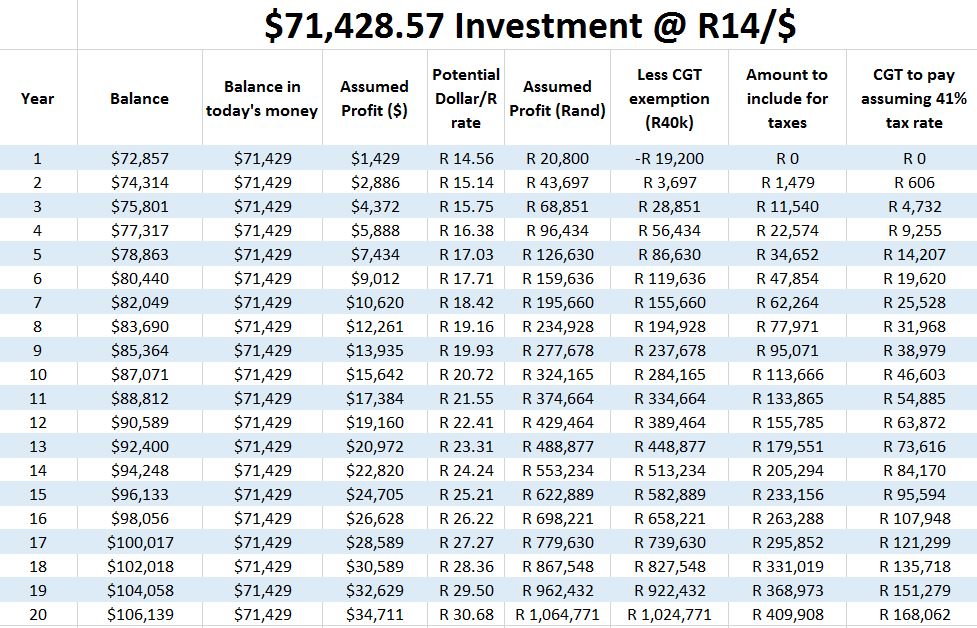 In this table we took the R1 million, converted it to dollars and then bought a property overseas. Again the only increase in value is from inflation, this time at 2%. Then to be able to back convert, we’re assuming the rand/dollar rate will weaken at something called the inflation differential, basically the difference between SA inflation and US inflation, which is 4%. Thanks to a changing of foreign investment laws in 2011, this time after 20 years we only need to pay Tom Moyane and pals R168k, less than half of what we’d have to pay him if we bought the property in South Africa.

The outcome is similar for stock market investments, but at least with those you do get actual real growth. Now I’m not sure about you, but I’d rather not pay twice as much in tax if I can avoid it, which is another reason why, apart from my tax free savings account, all my investments are going offshore.

If you’re worried about this and think I’m being very unpatriotic, see if you can get SARS to index capital gains to inflation. If they don’t listen, don’t worry too much, because to ease your concerns I can tell you there is really no problem at all.

As it is now an undeniable fact that you can’t beat the market by picking shares or picking economies, more and more people are doing with their money what science says they should do and are investing in the whole world. This means that hundreds of millions of people who haven’t heard of South Africa, or who think it’s a region rather than a country are now putting 0.74% of all their investments into South Africa. I’m one of them too. Putting 0.74% into SA of course, not one that thinks it’s a region.

And there’s more good news. This 0.74% number can increase, as it’s based on the percentage of the global market that is held by South Africa. In other words if the South African economy grows, the percentage people invest in South Africa will grow too. Sadly if our economy shrinks, people will invest less in us.

Hopefully this will be motivation for our government to do the right thing by focusing on growth policies rather than ways to lie, steal and cheat people out of money. I know, it means putting other people first, something which isn’t really a requirement in our current state of politics, but hopefully the voters will keep moving in the right direction with their choices.

Note: If you really do want to invest purely in South Africa, there is a way you can do that and still pay less in CGT than you would normally. By buying the iShares MSCI South Africa ETF you can invest in the top 60 or so South African companies using US dollars. This means when you do eventually sell, you’ll only pay CGT on 2% inflation rather than on 6%.