About what every swim costs, The woman is extra

I’m not a fan of Robert Mugabe by any stretch of the imagination. In fact, given the option of dinner with Mugabe or rubbing my ears with honey and sleeping on a fire ant nest, I’d go looking for some honey. So why would I be happy about him making an announcement that whites can’t own land?

Well to be quite honest, I’m not. It’s another ridiculous statement from a man who’s single-handedly responsible for taking the bread basket of Southern Africa and turning it into the basket case of Southern Africa. I’m just feeling like I should agree with him after getting a R97k quote from the damp repair guy. This is after spending R3k on a faulty wiring circuit, and pouring money into a large hole I have in my back yard. Some call it a swimming pool, but that would indicate the need for swimming. At the rate I pour money in, my cost per swim works out to about R600 a dip! But that does lead me onto my topic for the day. Why a rental property makes a totally disastrous investment choice (for a layman like me that is, I’m sure there are expert landlords that can make it work). I’ll don my flame suit here because I know this will be a touchy subject. Let me explain.

I’ve been a homeowner ever since leaving my folks place. “Why pay someone else’s bond?” was my standard saying when people asked if I rented my place or bought it. Then I moved, and instead of selling up, I just bought another place and rented the first out. I quite liked the extra income coming in, so I also bought another place to add to my property empire. Step aside Robert Kiyosaki (Rich dad, poor dad) I’m the new pariah of property, and soon I’ll have more than you. Interestingly that last bit might actually be true, Robert declared bankruptcy in 2012, well in a way, he actually let one of his companies take the fall for him.

So how did my plan fair? Well fortunately I’ve always saved a large chunk of my salary, so I was able to pay the bonds of the places off fairly quickly, but without running the calculations, I never really knew if this was a good investment or not. Eventually I sat down and did the maths. The results didn’t make me a happy man. I was spending far too much on maintenance, levy and taxes to make anything over the inflation rate. A little while later I sold one of the properties, getting slightly more than I’d hoped thanks to a good estate agent, and then I could do the final calculations. I went from being unhappy, to being seriously miserable. The numbers actually showed that not only hadn’t I made money, but I’d lost some to inflation.

Don’t believe me, here are the numbers.

So let’s work out that percentage. As you can see here, it’s about 4.8%. Miserable 🙁 and below inflation. So this investment actually cost me money. As well as time. And it was risky, ever tried to get rid of a non-paying tennant?

You don’t believe me of course, because you’ve heard everyone talking about how much profit they made on their houses. This can happen, but only if you time a boom correctly. And that goes along with my theory on trying to lose money on the stock market. Over time the gains in property prices have only just been above inflation. Incidentally, I can see on the document from the deeds office, that the previous owner bought the same propery for R800k two years earlier, so it wasn’t a good investment for him either.

In the same period, I could have invested where I now do, in the satrix INDI. That has returned about 19.6% annualised over the last 7 years. If I had done that, it would be worth R3 884 136 today. So not only has it cost me money over inflation, it’s cost me over R2.5 million in lost earnings. And that’s where we get to the biggest cost in owning property, lost earnings… Bloody hell…

Now a smart reader would be saying I should hang on a bit. I didn’t pay cash, I was using borrowed money. That means that I actually made that R150k profit on a lot less money. Well that’s true, and they’re right, but that argument could be applied to any investment, and is one of the reasons Buffett is as wealthy as he is today. You could use borrowed money to invest in the market too and magnify those earnings. In any event, even with borrowed money, the equation doesn’t look that much better:

So I gained R137k using R217k over 6.5 years. That works out to an annualised rate of about 8%. A much better investment, at least I wouldn’t have lost money over inflation, but it’s still nowhere near what I would have gained using the market. You could say that it was a good thing because it diversified my portfolio, keeping a chunk of it in property, but for that argument I would suggest you look at the returns of the listed JSE listed property index, available as an ETF though the GRINDROD PROPTRAX SAPY. Over the period 2002 to 2012 (unfortunately I don’t have the latest data) it returned 19.3%, with some capital growth but with great dividends (8.1% for the last year). All while taking none of your time, and spreading the risk over countless properties. I know which route I’d go for next time I think of getting into property. 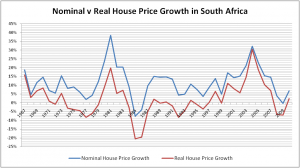 So when I tell people this, they always just tell me that it’s because I haven’t held the property for long enough. That after a long enough time property will beat everything else. Not so. Take a look at Graph 1, nominal vs real house price growth in South Africa from 1967 to 2011. In some years you score big, in others, lose big, but on average you’re only just above inflation. The longest running house price study, based on 400 years of data in Holland indicates an average growth of 0.2% over inflation average.

Another blogger I know tried to define the worst possible investment, I quite like what he said:

-It should be not just an initial, but if we do it right, a relentlessly ongoing drain on the cash reserves of the owner.
-It should be illiquid. We’ll make it something that takes weeks, no – wait – even better, months of time and effort to buy or sell.
-It should be expensive to buy and sell. We’ll add very high transaction costs. Let’s say 5% commissions on the deal, coming and going.
-It should be complex to buy or sell. That way we can ladle on lots of extra fees and reports and documents we can charge for.
-It should generate low returns. Certainly no more than the inflation rate. Maybe a bit less.
-It should be leveraged! Oh, oh this one is great! This is how we’ll get people to swallow those low returns! If the price goes up a little bit, leverage will magnify this and people will convince themselves it’s actually a good investment! Nah, don’t worry about it. Most will never even consider that leverage is also very high risk and could just as easily wipe them out.
-It should be mortgaged! Another beauty of leverage. We can charge interest on the loans. Yep, and with just a little more effort we should easily be able to persuade people who buy this thing to borrow money against it more than once.
-It should be unproductive. While we’re talking about interest, let’s be sure this investment we are creating never pays any. No dividends either, of course.
-It should be immobile. If we can fix it to one geographical spot we can be sure at any given time only a tiny group of potential buyers for it will exist. Sometimes and in some places, none at all!
-It should be subject to the fortunes of one country, one state, one city, one town…No! One neighborhood! Imagine if our investment could somehow tie its owner to the fate of one narrow location. The risk could be enormous! A plant closes. A street gang moves in. -A government goes crazy with taxes. An environmental disaster happens nearby. We could have an investment that not only crushes it’s owner’s net worth, but does so even as they are losing their job and income!
-It should be something that locks its owner in one geographical area. That’ll limit their options and keep ‘em docile for their employers!
-It should be expensive. Ideally we’ll make it so expensive that it will represent a disproportionate percentage of a person’s net worth. Nothing like squeezing out diversification to increase risk!
-It should be expensive to own, too! Let’s make sure this investment requires an endless parade of repairs and maintenance without which it will crumble into dust.
-It should be fragile and easily damaged by weather, fire, vandalism and the like! Now we can add-on expensive insurance to cover these risks. Making sure, of course, that the bad things that are most likely to happen aren’t actually covered. Don’t worry, we’ll bury that in the fine print or maybe just charge extra for it.
-It should be heavily taxed, too! Let’s get the Feds in on this. If it should go up in value, we’ll go ahead and tax that gain. If it goes down in value should we offer a balancing tax deduction on the loss like with other investments? Nah.
-It should be taxed even more! Let’s not forget our state and local governments. Why wait till this investment is sold? Unlike other investments, let’s tax it each and every year. Oh, and let’s raise those taxes anytime it goes up in value. Lower them when it goes down? Don’t be silly.
-It should be something you can never really own. Since we are going to give the government the power to tax this investment every year, “owning” it will be just like sharecropping. We’ll let them work it, maintain it, pay all the cost associated with it and, as long as they pay their annual rent (oops, I mean taxes) we’ll let ‘em stay in it. Unless we decide we want it.
-For that, we’ll make it subject to eminent domain. You know, in case we decide that instead of getting our rent (damn! I mean taxes) we’d rather just take it away from them.

And there we go. I’m an idiot, and a couple of bar down on where I could have been had I been smarter in my youth. Now if anyone’s interested, I have a house for sale, it’s lovely, in the right area, with a fresh coat of paint and a delightful pool in the back yard…

*Caveat. South African’s are really lousy savers. Having a bond almost forces them to save the value of the house over a 20 years period. I think on average it’s a good thing, but if you’re already saving money, there are far better places to put it than on a second property. And like I’ve said before, if you want to buy a house, buy it. Not because it’ll be a good investment, but because it’s a place you see yourself wanting to live, and a place for your kids to grow up in. Ah I’m feeling all nostalgic now 🙂

*New note, if you’re trying to decide between renting and buying a house, take a read here. You can probably guess which way I’m leaning, but the gigantic number surprised even me.