Let’s all be guilty of tax avoidance

Tax evasion is illegal, and will quite likely have you ending up with free accommodation. Sadly while free sounds great, it’s not quite the case when your roommate is a rather hefty heavily tattooed guy named Bubba. And Bubba likes you, a lot! Instead, bypass tax evasion and focus on tax avoidance. I highly encourage it. What’s the difference you might ask? To put it simply, one ends up with you behind bars, the other leaves you with more in your pocket to visit bars. In other words, tax evasion is doing something illegal to not pay taxes while tax avoidance is doing something legal to not pay taxes. Companies pay experts very large sums of money to help them tread this very fine line, saving them even larger sums of money in tax.

Now you might think that this is morally wrong, after all we live in a country that needs our taxes. Figures in a 2013 study indicated that just 3.3 million taxpayers are paying 99% of South Africa’s taxes, so is it right for these 3.3 million to try reduce the amount paid? Yes. Of course it is. To quote one of my favourite writers, James Collins, “Individuals have only one obligation to society, take care of yourself and any children you have so as not to be a burden to anyone else”.

That’s it. If you don’t want to contribute to society, that’s your business, but don’t expect society to look after you when you are physically and mentally capable of looking after yourself. And in case you’re wondering, I’m not happy to let anyone spend my money on a fire pool, cattle kraal or tuck shop. It’s just not on.

The government seems to agree with me too. They’ve been doing different things to help us not to be a burden on them, and by proxy all the other South Africans. Many years ago they came up with an idea where we could invest a portion of our money, and not pay any income tax on that portion. If you’re not already putting 15% of your income into a retirement fund, you really should. And if they raise that limit to 25% as has been discussed then you should put in that amount. The amount of tax saved will be massive, and it will compound. Yes you will one day have to pay tax on it, but at that time you’re likely to be retired and not earning nearly as much as now, so your tax percentage will be far lower.

Now I can hear all the anxious cries “I’m already putting my 15% away, but I still have loads of cash left, what should I do with it?”. Well thankfully, the government has given us another way to avoid taxes. This mechanism is called a tax-free savings account, also known as, depending on who you ask, a TSA or a TFSA. I like TFSA more personally. Now these TFSA things are new, so we need to figure them out. Unlike retirement funds, you can’t put untaxed money into a TFSA, but also unlike the retirement funds, you won’t have to pay tax on anything that happens to that money in future. Think about it as the opposite of a retirement fund. One you don’t pay tax on now, but do in future, the other you pay tax on now and not in future.

All looking good so far, what’s the downside? Well for starters, you can only put R30k into these accounts per year (R2500 per month if you like), and that’s total, not per provider. And you’d better make damn sure you don’t go over that limit, otherwise you’ll be donating 40% of the over amount to the guy with a head shaped like a Toyota Yaris. Then there’s the lifetime limit of R500k, far too low if you ask me, but at just R30k per year it’ll take nearly 17 years to get there. Another downside is that they only keep score of the deposits, not withdrawals, so if you put in R30k in one year, then need R10k for an emergency, you can’t put that R10k back in again until the following year, and it also means the total you can now contribute into that account is R490k instead of R500k. As you can see, these accounts aren’t for the short term. They’re no good for an emergency fund and will ideally be left untouched for the 17 years to get the most benefit out of them.

Now what should you do with your R2.5k every month? Well if you’re stupid you’ll put it into one of the banks cash deposit accounts which all pretty much earn around 5.3% interest, guaranteeing you’ll lose money to inflation and being a total waste of a good idea. The next most idiotic idea would be to put the funds into one of the fixed deposit accounts, giving you ~7.3% interest, but catching you with penalties if you withdraw earlier. So given that you want to leave the fund alone for around 17 years, any type of cash is clearly out. Bonds are also out, they just don’t pay in these times, so all you’re really left with is the stock markets, and that’s a good thing, as only the stock markets have a relentless drive upwards given enough time.

If you’re a novice investor, this might worry you, as you know of people who lost a fortune on the markets. Someone may have even owned African Bank stock and lost everything, frightening you away from shares with their stories. But you really don’t need to worry, the government has put rules in place to keep you safe. Firstly they’re not letting you buy individual companies, so they’re protecting you from yourself, all you’re allowed to do is buy Unit trusts, and exchange traded funds (ETFs).

For the beginner, the difference between those two, is that in general, a unit trust is managed by a person who takes a lot of your money trying to be smarter than everyone else that makes up the market, while an ETF is that everyone else that makes up the market, and has been proven over time to do far better that humans at growing money babies, while being far cheaper at the same time. So ETFs are looking quite good, but there’s more good news. As the government knows that Unit Trust managers are mostly interested in lining their own pockets, they’ve given them a few extra rules. Firstly they’re not allowed to take a performance bonus like they usually do, so sadly they’ll have to give up their annual Aston Martin upgrade. They’re also not allowed to be too risky with your money by dumping it all into their favourite share, as there’s a limit for unit trusts of a maximum of 10% of the funds can be in one company, spreading the risk well. Interestingly, as ETFs are not controlled by humans, these rules don’t apply to them. The only rule ETFs have to deal with, is that they are Collective Investment Scheme (CIS) compliant.

Happily for us, the majority of ETFs are CIS compliant. The only ones I could find that aren’t, are those like NewGold and NewPlats which put all the cash into a single commodity. This leaves you with plenty of good options to choose from.

To go about buying these you need to have a brokerage account based on the TFSA rules. And as always with investing, you want to keep the fees low so they don’t rob you blind. I’ve looked at all the options, all the banks brokerage accounts either have minimum fees or high commission percentages or both, but there is one company that stands out, and I’ll happily promote them here, even though I get nothing from them in return other than being a happy customer. That company is Easy Equities. They’re the only brokerage I know of that has no minimum trade fee, while also having the lowest commission I could find of just 0.25%. Fees are very important here, remember when I said they only track deposits, well the fees are counted, so if you put R30k in a company that charges R1k in fees, you only have R29k in your account that year, you lose out on the R1k even if you had the cash to try make it up. Here’s a quick comparison between the fees charged by Easy Equities compared to some of the other options: 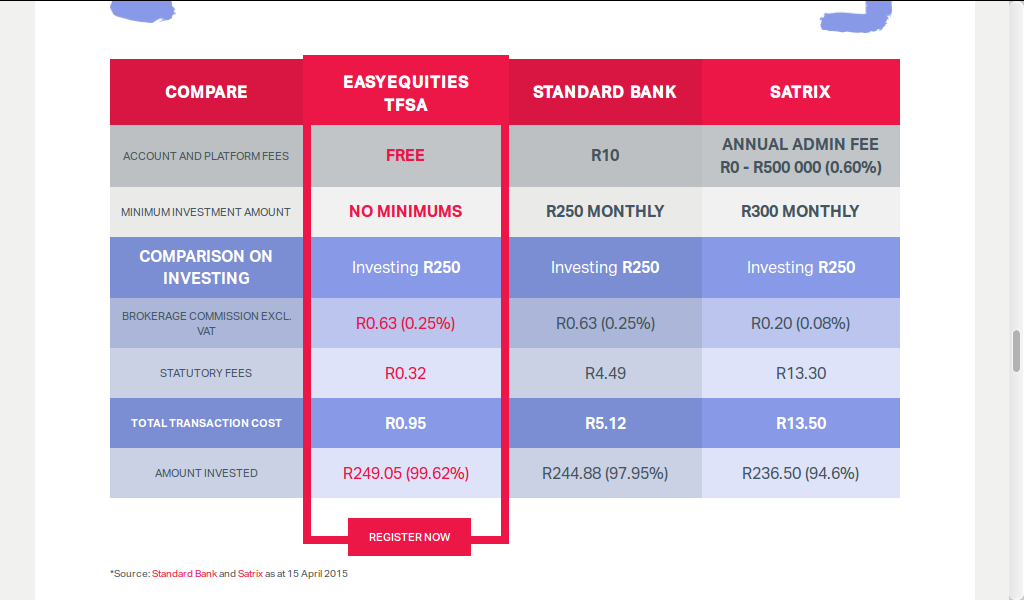 As you can see, they’re an easy choice, and you can open and account and FICA it too all online, it really was painless for me! So get online and open your account. Once that’s done you need to decide which ETFs you’d like to go for. As that’s a personal choice I won’t give you instructions here. A useful tip would be to try and maximize the tax savings, so for instance if you’re employed in the 15%+ tax brackets and want to own dividend stocks and property stocks, it would be better to put the property stocks into the TFSA as they’re taxed at income rate, compared to the dividend rates of just 15%. If you’ve already retired and have an income that falls below the 15% limit, then I’d put the dividend stocks into the TFSA and keep the property stocks in your regular account.

If your situation changes over time, like say you retire, you can sell the ETFs in your TFSA and buy others. You won’t even have to pay capital gains tax like in a normal account. Hell if you’re really ballsy you could trade stocks in these accounts and not have to worry about any income taxes!

So go make use of these tax avoidance schemes, someone earning R300k a year can currently put 15% or R45k into a retirement fund, and R30k into a TFSA. That’s 25% of their gross salary going into funds that to help you screw the taxman. Do it! That 25% alone will give you the ability to retire without dropping your lifestyle one bit after 33 years, so if you start doing this at 22 you can retire relatively young at 55.

For an added bonus, you can open one account for each family member, making this a great way to invest for your children. If you max an account out now for a newborn, earning 15% a year, you could end up with R1million in todays money by the time the child turns 17, all paying out dividends or income completely tax free. That’s some serious F-You money to give him a good life. If you manage to keep the account secret and just let it ride, by age 50 your child could inherit almost R15million in todays money!