Can you make more money? 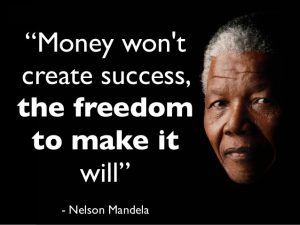 Speed up your time to financial independence by simply making more money, what a revolutionary idea!

No I’m not here to sell you on some crazy pyramid scheme, in fact I’m going to recommend you completely forget anything related to pyramid schemes or multi-level marketing (MLM) exists, because well researched evidence points to the fact that 99% of participants involved in MLMs lose money. Even if you don’t you’re almost certainly going to annoy your family, and alienate your friends, just don’t do it. Starting one can be very profitable though if you don’t mind the risk of jail time, like this smart lady who managed to convince thousands of people to buy a cheese making kit earning her €145 million…

No, none of that rubbish, just an honest way to earn a few extra Rand so that you have more to save and invest. But first I’ll start off with a statement. It’s far easier to save more than it is to make more. That’s why whenever someone asks how they can get their finances in order, I always recommend they look at the burn side of their budget rather than the earn. It’s something you have complete control over, and in most cases is filled with excess, waste and debt repayments. There’s bound to be some low hanging fruit, so most people can find money to save somewhere. My wife did that last year, and though I still can’t figure out how, she managed to out-save me without even trying. We figured this out weeks ago, and I still get almost daily reminders…

But sometimes trimming the budget isn’t enough to get ahead, and you just need to earn more.

One way to do this for people who work in the private sector is to simply work harder and try to move up the corporate ladder. I on the other hand work in an organisation that has a fixed pay scale. There are NO promotions, and NO negotiations at my office. You take the pay they give you, or you leave. I worked my ass off for the last two years and was rewarded by a 4.4% increase last year, and a measly 4% this year.

Anyone care to remind me what happens when you compound your pay at less than inflation percentages? Yes, you get a compounded decrease in real income. If it was just me I’d be concerned that they’re not happy with my performance, but it’s an across the board thing. Isn’t equality great, we all get screwed the same amount!

Now I’m not really complaining about this for two reasons. Firstly, because I’m pretty much at the top of the earnings ladder for local staff in my organisation, so I still earn a very decent salary, but secondly, and I think more importantly, I gave myself two raises last year!

Yes, in spite of getting a real salary decrease, I earned more last year in real terms than ever before thanks two these two delicious additions to my salary:

1) Dividends
The gift that keeps on giving, literally. I’m invested in a global fund which means I quite literally own a tiny piece of over 3000 different companies in 47 countries. That adds up to hundreds of thousands of people who go to work every day for me. If you’re assembling iPhones in South Korea, you’re making money for me. I have a friend who works at Standard bank, he’s also making money for me. So is my dad who works for Ford, my two friends who work for Vodacom, that University buddy who now works at Anglo American. All working for me.

Even if you don’t work for one of those 3000+ companies, you certainly support many of the them and in turn give me money every year. If you have pretty much any computer, you’re giving me some money. If it runs Windows you’re giving me more. Did a Google search, or spent time on Facebook recently? That’s some more cash in my pocket. All those Castle lights you had over Christmas put a few extra fractions of a cent into my bank account too, thanks. Made a phone call, bought toothpaste, put petrol in the car, ate your froot loops for breakfast, you name it, it likely made me a tiny bit wealthier.

Sure each of those was just a tiny increase to my net worth, but since I’ve been saving and investing for many years it’s begun to add up, and snow ball due to re-investment of those dividends. Last year half my living costs were covered by dividends, this year it’s going to be more due to the generally increasing value of the dividends, and because I plan to invest more of my disposable income into the market.

Yes I made the heading huge as it is the real purpose of this post, the side gig. What is a side gig you’re asking? Well it’s anything you do outside of your normal job to earn money. I love side gigs, LOVE them. Unlike dividends, you don’t really need a huge amount of money to get started.

Here are some more reasons why I love side gigs

So now you know why I think a side gig is a must have, it’s time for a challenge. Let’s make 2017 the year we get our side gigs supercharged. If you already have one, see if you can hit new highs with it. This site barely makes enough to buy me half a beer a day. I’m hoping to double that, a whole beer! To do that I need to increase the number of eyes on the site, so please tell your friends and use the share button liberally! My other goal is to get my new YouTube channel side gig over the R500 a month mark. Last month it hit a record a record number of views bringing in a whopping R80, not per day sadly, but it’ll get there and it’s fun to do.

The examples above are all true, for once names have not been changed. The following examples are also real people I know who have successful side gigs:

Tracey-My friend Tracey is a paragliding instructor. She gets paid thousands of rand per student to strap them into a harness and run them off a mountain. She loves doing it, and the students have the most fantastic time.

My mom-My mom is an expert at side gigs. When she started out as a teacher she used to mark extra exam papers. Later she moved into teaching English to foreigners after hours, and after becoming a University prof she started a very successful consulting and writing gig.

Bob-I can’t remember his name so I’ve called him Bob. I was sent on a management course with Learning Tree in Rome a few years back. Bob is a successful business owner in London, but side gigs as a management coach for the learning tree. He takes a week off every now and then and gives training which he is amazing at. He loves it because he gets to travel to interesting places, apparently learns from each course himself too, and gets extra cash as a bonus

The la Vagabonde crew-Okay so I don’t know these two personally, but they do have my dream job. This young couple sail around the world on their yacht and people give them $8000+ per video. They do around 4 videos a month, so the pay is fantastic. I’d do the job extremely happily for one sixteenth of that… Still dreaming…

John-My friend John is a software developer. He also loves paragliding, so turned that into a side gig. First by running one of the flying sites, then instructing, but now he gives tandem flights to tourists in Cape Town for R1250 for a half hour maximum flight. On a good day he can do 8 flights launching off Signal hill or Lion’s head. Aside from being a beautiful way to spend the day, it’s so much money that after the three month tourist season he has enough to last for the rest of the year!

My wife-I’m married to a hotshot hairdresser. In 2010 she won a world stylist of the year contest and ever since then has been in huge demand to give training or do stage shows all over the world. Who would have thought a hairdresser could get paid to travel to exotic destinations? I didn’t but next month we’re using her paid for ticket to Chile to subsidise a camper-van trip and explore the sun soaked beaches, smokey volcanoes and the crackling glaciers.

My wifes folks-As they live on a plot with what used to be an empty granny flat, they’ve turned to airBNB rentals for some extra income. Now for very little effort they get people booking out the space for a couple of weeks every month. Apparently it’s fun meeting all the travelers, and I’m sure the extra thousands of rand it brings in every month is quite welcome too.

Tom-Also a name I forgot. Tom used to make necklaces out of bored out coins like the one in the picture to the right. He did this while working, then when his girlfriend decided to go work on superyachts in Europe, he decided to join her and took the equipment along 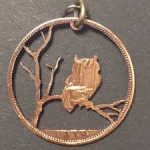 so he would have some income to hold him over until he found a yacht job.

Freya-My friend Freya always sold herself as an artist who models on the side, though when she was younger I’m sure that the modeling brought in far more money than the art. She is a very talented artist though, and has sold many paintings for large sums of money.

Marc-My friend Marc is a side gig guru. In his day job he’s an IT manager but he also owns two Ubers and manages a third. Apart from that he runs a successful tech blog, started the annual iphonography competition, and since three side gigs were too easy for him, he’s picked up a fourth as an aerial photographer, so he gets paid to fly a drone around interesting places for money. I’m pretty sure there are more side gigs I don’t even know about with him! Keep up the great work Marc

George-George is a driver at our office. Drivers aren’t particularly well paid, but George has a talent for finding undervalued cars, fixing them cheaply if needed and selling them at a large profit. He does one or two of these a month, and brings in more than his salary doing it!

Sarah-This new years I met a marketing research specialist who loved to cook. She volunteered in a restaurant kitchen for a while to learn a little more. She must have done really well, because now she has a paid chefs position twice a week.

Do you or someone you know have a great side gig, or is there something you’re thinking of getting into? I’d love to hear what in the comments below.