7 Financial products so bad they should be an April fools joke! 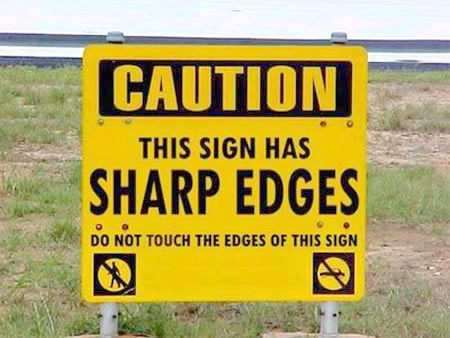 It’s April fools day, but since I’m still upset that I fell for two of them (Heyneke Meyer returning as springbok coach and myBroadBand launching uncapped fibre for R99 a month) I thought I’d spare you any more stupid practical jokes.

Instead, I’m offering you an antidote to the madness. A kind of an unApril fools joke. I’m going to list out the top seven financial products so dumb, we should all be wishing they were practical jokes instead of reality. So let’s count them down:

7) Unit trusts
I’ve waxed lyrical before about how utterly useless these stupid things are. Well actually only to the consumer, the producers of these products are laughing all the way to the bank. I can just see them in their board meetings giving each other high fives while chucking away to each other about how they manage to lose people money (relative to the market), and get paid to do so!

Us poor consumers on the other hand spend giant chunks of our investment earnings on something that performs like a damp squid in a teacup (yes I mix metaphors with blatant disregard for the English language). It is truly astounding how fund managers can be shown pages and pages of evidence that they’ll never beat the market, and yet their answer is always the same, “Uh yeah, but you know that’s in the past, we’re going to do better in future, we promise”. And we fall for it, again and again.

For yet another reason to avoid the extended warranty, you only need to look at technical advancement. Do you really want to send a four and a half year old laptop away for a month to be repaired when it’s near the end of it’s useful life in any case? What about the iPhone that just broke after two years which will very soon need a new battery, or the Playstation 2 which you can’t get games for anymore? Don’t be dork and pay more for a product than you actually need to, give the extended warranty a miss.

5) Short term loans
So you have no money right now, but you still want to go on a relaxing holiday to the beach, so you think a short term loan will do just nicely for you. What planet are you from where things work like that, Planet Zuma? Short term loans can charge as much as 953% in interest, yes I’m talking about you you Wonga-robber. If you think that will an easy respite to a financial shortfall, think again. It’s going to bury you so deep in debt, that the loan shark collector who will eventually turn up, will need to bring an excavator to dig down to you before he can break your kneecap with a warning that he’ll be back next month. Sadly starting in one of these loan agreements is often the last step in the slow walk to bankruptcy, because, just like investments, debt also compounds it’s interest.

4) Credit cards
Credit cards aren’t much better than short term loans. You’re also spending money you haven’t earned yet on pretty things that will spend their lives gathering dust in the back of the closet, or things you can’t fit into anymore because you’ve overdosed on KFC lately. But of course you just have to have that Super Ultra HD 3D Smellovision which would have cost someone who saved up his cash R20 000, but for you who just can’t wait, you get it at the bargain basement price of R25 000 over 6 monthly payments. Yes, for being so financially astute, you get a TV for 25% more than it’s worth! Cut up those cards and get a debit card. You’ll still be able to swipe for things instead of paying cash, and you can still order your must have robotic vacuum cleaner online through your favourite website peddling not so cheap Chinese gadgets.

3) Pyramid schemes
I once succumbed to the “business meeting that will change your life”. Change my life it did, as I nearly stabbed myself in the kidney to get out of that place. And contrary to what you seem to believe, your amazing essential oil pack is not that essential to me. You know, I doubt I couldn’t be less “on fire” for your network 21 scheme, but keep talking while I add you to the ignore list on my phone and block you from my Facebook, forever. Herbalife? More like Herbadeath of our friendship. But don’t worry, keep spewing those motivational quotes that have absolutely nothing to do with the product you’re so desperately trying to sell to reclaim your spare bedroom space while trying to convince yourself it’ll bring you enough “passive income” to quite your day job. No, just no and go away forever you life-force sucking leech.

2) Ponzi schemes
I can’t believe I have to write about this, but open up a news site or one of those antiques called newspapers and you hear about these far too often.

Yes, you’re going to get 20% returns per month guaranteed when the market average is around 1%. And yes, you can give this magical person R1000 now and in three months he’ll give you R3000, it all sounds so logical. If you believe any of that you need to walk around with a sign on your neck that says “I’m stupid”. You are the reason that the chainsaw I saw at builders warehouse has a warning sign saying “Do not hold the wrong end of the chainsaw”, and that my wife’s hairdryer says “Do not use in the shower”.

Common examples include Instant Wealth club (that doesn’t sound suspicious), Kipi, MMM South Africa, Creation Adventures, but there are many others. A simple rule of thumb in detecting these is this:

If it sounds too good to be true, it probably is.

Yes, I’ve saved the best for last. The absolute worst financial product we have in South Africa at the moment is our president. I didn’t capitalise that on purpose. This is a man so stupid, he can’t even read numbers, never mind manage a sophisticated economy.

But now he’s been ordered to pay back the money. Gee thanks, even a blithering idiot knows that asking a criminal to pay back a tiny portion of money, with money he’s also stolen is not restitution. There is only one fair outcome here, to put JZ in prison. The minimum sentence for corruption is 15 years, which would please me greatly. He won’t be alone either, he can have his friends Ajay, Atul and Rajesh living right next door, and his son Duduzane just down the passage. Think of it as a very secure Nkandla, without the worry of useless firefighters, stray CIA cows and attack chickens.