The 5% rule that has never failed 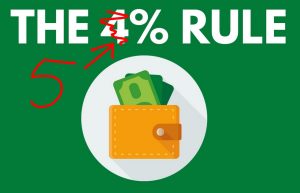 I’ve been saving and investing a third of my take home pay for quite a few years now, and even though I have nearly R7 million (R6 and 3/4 million to be exact!) invested, at my current savings amount of R15 000 a month, it’ll take me another 4 years to get to the R9 million I need to be able to retire spending the R30 000 a month I do now.

By then I’ll be 48, and who knows if I’ll still be able to go cycling through Europe, hiking in Patagonia or backpacking through Asia.

Surely there’s a way to speed things up a little?

Thanks for writing in Ms Saver. Have you ever heard about the 5% retirement rule? Of course not, I just made it up. You’ve more likely heard about the 4% retirement rule. What this rule says is that if you were to retire today, you could withdraw 4% of your total nest egg this year, and adjust that amount for inflation for the rest of your life, and you’d likely never run out of money.

Now spending 4% in your first year is the same as spending 1/25th of your net worth, but I think both those numbers are stupid because a) I can’t think in percentages; and b) I have no clue how much I spend on anything each year. I know what I spend each month, but I can’t be bothered to multiply everything by 12.

That’s why I was happy to know that 4% per year = 1/25th per year = 1/300th per month. With this new information I wrote this blog post entitled The fantastically simple rule of 300, along with a fancy calculator you used in your link to work out how long it would take until you had your R9 million.

So what exactly is this new 5% rule?

Well unlike the 4% rule which says start with 4% of your total in year one and adjust up with inflation every year, the 5% rule says you take 5% of what you currently have each year, meaning your withdrawal amount can go up or down every year depending on how the market has moved.

So if you start with R10 million, in year 1 you could spend R500 000. If the market climbed by 25% that year, and you were left with R12.1 million, in year two you could then spend just over R600 000, how fantastic is that! If on the other hand there was a major crash, and you ended up with just R5 million in year two, you’d have to cut your spending down to R250 000 and have to give up your bikini waxes.

If you had to follow that rule you would never run out of money, guaranteed. In fact it works for any percentage, even 50%, the only point to watch out for is that the 50% would become a very small number very fast, and that would suck, greatly!

To avoid that miserable scenario, it’s time to introduce a new calculator called cFIREsim. This isn’t one I built, which should be obvious because it’s insanely complicated. Fortunately it’s also insanely good at running historical numbers. What it does is take your retirement numbers and then pretend you retired every year from 1871 to now.

As it’s been programmed with the market returns as well as inflation for all of those years, it can show you what would have actually happened if you retired in each of those years, spending as much as you’d chosen.

You’re both equally likely to be just fine, though the $ based spender would probably be traveling the world first class while you recline with the livestock in the back. More proof that it’s not what you earn that matters, all that’s important is what you spend in proportion to what you earn.

So now, if we use this calculator to see what would happen to the young lady above using the new 5% rule for a 40 year retirement we get the following data:

The first thing to realise there is we have a 100% success rate, that’s great! You can also see that on average you’re likely to die over 50% wealthier than when you retired, and these numbers are adjusted for inflation, so you really will be that much richer. In the best case scenario you amazingly end up with more than 5 times the wealth, being able to spend a huge R140 000 per month!

But there’s also a problem. In one of the simulations you went through something called a Sequence of Returns Risk, also known as moerse kak luck. In this retirement year you would have ended up only being able to spend R116.7k a year,  just R9.7k a month. That’s 66% less than what you were planning to spend, likely an impossible task.

When I did my budget earlier this year I planned a barebones budget, and the best I could realistically do was cut 25%. We’re going to need another plan, and happily, I have one.

First you need to realise that bad times happen to the stock market far less than good times, so while it’s good to plan for the worst case scenario, in reality you’re unlikely to end up in one.

Then it’s time for the plan, the key is flexibility:

So that’s the plan, when the shit hits the fan you can keep drawing half of your expenses from your investments, cut your costs by 25% and make the same amount of extra money.

Here’s how that looks in the simulator:

Again a 100% success rate! Sure your average is marginally down but it’s barely noticeable. The above rules also aren’t cast in stone. If you can cut costs in half when the economy implodes then you don’t need to bother with a job ever again, and likewise, if you can get a job to cover half your expenses, you won’t need to bother with budget cuts!

If you’re still worried about an upcoming crash you need to remember that this strategy and the 4% rule have survived all major crashes of the last century, even the monstrous great depression, the worst economic downturn in the history of the industrialised world, where the markets lost 90%. That makes the 2008 crash look like child’s play in comparison. As long as we don’t have a situation worse that that we’re fine!

*For fun I ran the same scenario with a 6% drawdown, it had a 98% success rate and left you dying with around two thirds of your money left over. I prefer to grow my wealth even after retirement.