EXPOSED: #InvestorChallengeLeaks What Patrick spends in an average month 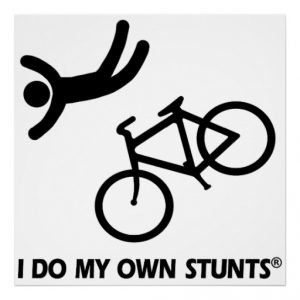 After 2km I realised I’d forgotten my helmet, and my headlamp, and my tail light. At this time I was doing 45km/h down the last steep hill before the Collosseum. The wind was tearing my hair back while I pounded those pedals without mercy. In the background I swear I could hear the Ride of the Valkyries playing as I swooped past the odd car.

For some reason that was the moment I realised that what I was doing was particularly dangerous. It was dark and I was unlit, so I thought it would probably be best to get off the road and onto the bike path. During this lane change I saw a gigantic pothole far too late. I knew it would be a big hit and tried to hold on. Sadly the bike wasn’t the best maintained piece of equipment, and the front wheel turned without the handle bars doing the same.

“Oh Sherbert!” I thought to myself, but not in those exact words. “This is going to hurt” was my airborn thought. I seemed to have all the time in the world to think about just how. As time stood still I made a note of the fact that I was helmetless and the road was hard. “Do whatever you can to protect your melon man”. I tried, as I was twisting to the left I put that arm out to try stop my fall but it was pointless. My arm hit, my head hit, and the world went dark.

Then it lightened again. “Hey I’m alive” is always a good thought. “If I don’t get out of the road I might not stay that way”. So I did. At this point I realised large amounts of blood were coming out of a new facial feature above my left eye. It’s weird what you think at a time like that. My thought was that this would put a serious dent in my ability to pick up attractive women. Really. I also knew I shouldn’t keep my colleagues waiting and be an inconsiderate host. I picked up the bike and straightened the handlebar. At that exact moment I felt a monstrous amount of pain in my left arm. The kind of pain that tells you that all is definitely not well.

I made it to the metro station, and my friends faces confirmed that I was definitely far from pretty to look at. A phone call and some waiting time later George was driving me to the hospital, where I met a very beautiful nurse who rushed me past all the queuing people to the head injury section where nobody needs to wait. Fortunately all the damage was superficial, and they superglued the area around my eyebrow back together and put a large patch on most of the left side of my face and then made me wait for the arm doctor.

He didn’t speak any English, neither did the pretty Italian nurse, so it was sign language from then on. “The elbow is a ball in socket joint” he tried to mime grinding his fist into his other palm. “Your socket is kaput” was the next move shown in german sign language weirdly by stretching that hand’s fingers out in a jerk. They sent me on my way without painkillers, but happily also without a monstrous bill. Emergency care in Italy is free.

Amazingly my face healed with only the slightest scar in my eyebrow. That superglue is pretty awesome stuff. Six weeks later I was seeing an orthopod in Johannesburg, who asked what idiot told me to keep this cast on for 6 weeks. Your tendons have shrunk and it will take you half a year to be able to use your arm properly again.

And that was it, in 6 months I put on 10kg due to a lack of exercise. Then when I could exercise again it never came off, so for the first time in my life I had to watch what I ate. I counted calories, looked up carbohydrate percentages and sliced a gram off cheese of my daily allowance because I could have 135 grams and not 136.

I went from 24% bodyfat to 5.5% bodyfat, and my strength and muscle tone were fantastic. The gym instructor measuring me thought his machine was broken only to accept the numbers when I took off my shirt so he could use the calipers. After a year of analysing food I knew instinctively what I was eating. How many carbs were in a handful of macadamia nuts and how many calories my dinner of steak, egg and creamy cauliflower dinner came to. I’d earned the right 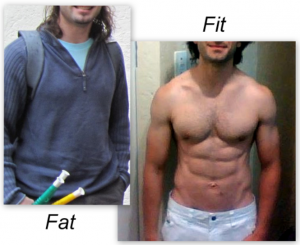 Watching what you eat is a great investment

not to have to count and measure my food anymore. Eating well became internalised.

And this is where we finally come back to money.

If you, like so many people in the world, just don’t know where your money goes every month, you have to keep a budget. The first path to financial freedom is knowing what you’re spending and where. You can keep a notebook, use an app, or only spend money on cards and not cash, but you do need to find out where it’s going, and what is wasteful and what is really necessary.

Happily I’ve been living well below my means ever since I started earning a salary. In fact there hasn’t been a year where I’ve spent more than 50% of my takehome pay. Due to that I feel I’ve earned the right not to keep a budget, which meant I had actually no idea how much I spent on various parts of my life. I knew instinctively that it was a lean budget, and that my few extravagances were well earned and deserved. I knew when things were a need and when they were a want, as well as which wants were good to satisfy and which I should avoid.

If my son is sick he gets to go see doctors and any medication necessary. That’s a need. I won’t survive without eating, so that’s also a need. Sadly I can’t use that excuse for a R79 box salted caramel ice cream from Haagen Dazs. Instead I let your wife get that and eat it all while she’s out. Sorry hon!

Wants on the other hand are things like plane tickets, drones or a new car. I once thought I should buy a classic sports car. I was totally convinced it would make my life better and had huge plans for it, until the day I drove it home. I already knew on that first drive home that it was a huge mistake, and just the site of it in my garage drove me insane. Luckily for me it spent most of it’s time at he workshop spending my money on things it needed, so I didn’t actually have to look at it all that much, and then I sold it.

That’s one of the reasons I don’t have a drone, or a boat, or a Toyota FJ cruiser with a roof tent, snorkel and winch. I find that keeping a month cooling off period before a potential financial mistake is a huge help, because often the allure of the object simply fades, and is replaced with relief that you never actually bought it.

But now I’ve been exposed. Thanks to the 22seven app (no I’m not getting any kick backs) I’ve been using for the past 6 months, I finally have accurate figures on where my spending is going. And without keeping you waiting any longer, here are the totals of my spending for the last 6 months, the monthly averages and a few comments: 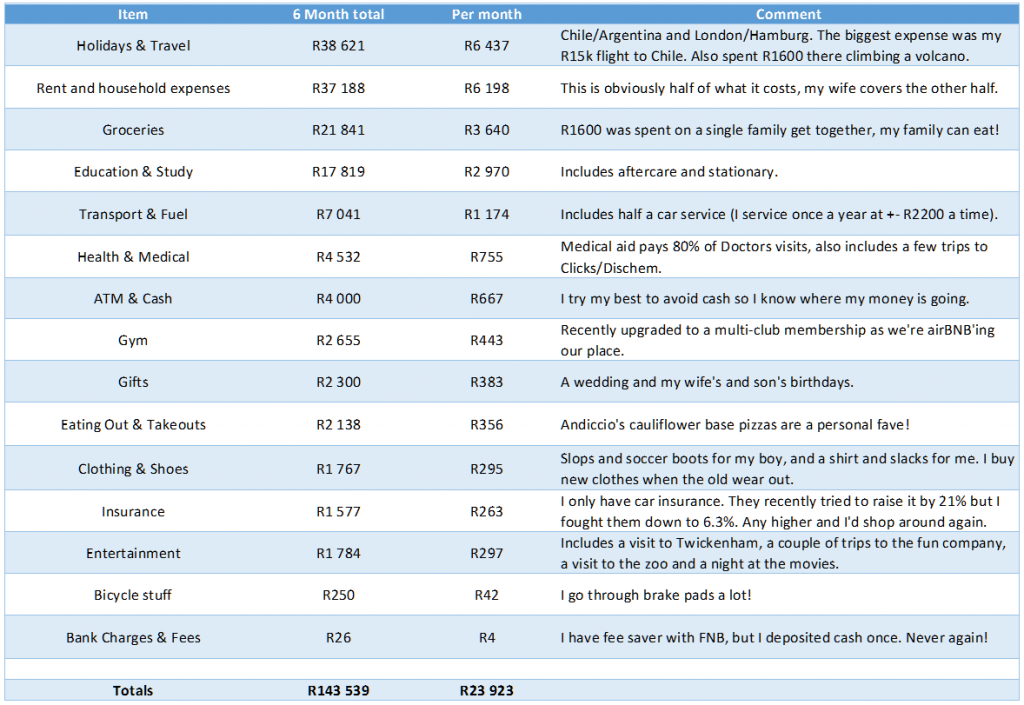 As you can see it’s ranked from biggest expense to smallest. And as someone who truly loves traveling, I went to Chile and Argentia in February, and just got back from a trip exploring Hamburg and London. Later on this year I’ll cycle the length of Portugal all the way north into Spain for 3 weeks. This is a very unusual for me, as I generally only do one foreign trip a year, and this year it was meant to be just Portugal and Spain where costs are super low, and the flight under R4000 return.

This expense is probably more than twice as high as it would be in a normal year. If I remove the holiday spending from my budget, I get to almost exactly the figure I plan for with my monthly spending, R17486. I generally like to keep things under R18k with a third for housing, a third to look after by son’s needs, and a third for me.

Yes I’m lucky I built an electric bike, so my fuel cost is lower than most peoples, my old car is also cheap to run and very cheap to insure. My wife is shocked at my clothing spend, and does buy me the odd item I insist I never need, which thank her for and ask her to please not do it again. Personally I only replace clothes that wear out. That pair of slacks wore out in the office, so I had to rush to Woolies that day! My dry mac bought in first year is refusing to wear out, so I still wear it. The same for the Sharks rugby shorts I bought from Mr Price in Mbabane for a ridiculously good price. Nobody there wanted them!

Feel free to criticise my budget in the comments below, and to all those in government, I’ve shown my cards, could you please give me us honest view of where our where our tax money actually goes? I’d like some details too, just saying Dubai isn’t going to cut it!

*If you’re curious cheese at under R80 a kilo warrants stocking up and the heater was fixed after an hour of me lying with my head in the drivers’ footwell with my feet on the headrest, armed with a roll of duct tape and a tube of no more nails. It’s still perfect nearly two years later. Also happily 7 years later I’ve still never been in double digit bodyfat levels again, in spite of the stolen Haagen Dazs.