Death spirals in South Africa and what to do about them 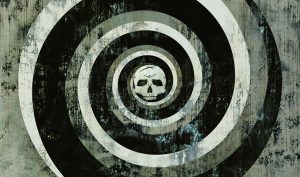 As I said, we’ve been traveling. This time we rented a camper-van and drove 2500km through the two countries separated by the Andes, the worlds longest mountain range. We also climbed two of Chile’s 2400 volcanoes, and slid down one of them on our now rather bruised rear ends. It was another different and exciting holiday. As usual I’ll post some pictures at the end of the post.

When my wife suggested a camper-van trip she was thinking of a big American Winnebago type vehicle with a bedroom, kitchen and bathroom included. Unfortunately for her the budget only allowed a small van. A Mitsubishi L300 which is quite similar to our local Toyota Hi-Ace taxis, except this time with a bed in the back instead of 16 seats and 23 people.

Now I’m quite comfortable roughing it, give me a bed and a hot shower in the morning and I can pretty much live anywhere. Something I put to the test quite often in some of the very dodgy countries I tend to visit for work.

While the odd person in Argentina can speak English, practically nobody in Chile can. The two exceptions were the Canadian owner of the mountaineering company (married to the chief guide) and the father of our camper-van rental company’s owner who once worked in Texas. When picking up the van from him, we heard that it was just bought, the service was finished the night before and they were still awaiting paperwork from Santiago which would arrive very soon.

So while we were hoping to hit the road as soon as possible, it appears South America has their own version of African time. This meant that waiting for paperwork was a time period counted in hours not minutes. Fortunately we were in a great mood and making some lemonade with the lemons being dished out we got to know camper-dad quite well.

Until recently, he was a lecturer at a private university, but sadly he has now lost that job. The reason for this is that Chile has just implemented free education, and due to that, his private university would have far lower attendance and therefore funding too.

So how was the Chilean government persuaded to provide free education? Well similarly to South Africa, they went through three years of student protests. Unlike South Africa though, these protests weren’t violent and destructive at all. No libraries were burnt down, and no buses torched. Instead they raised awareness through flash mobs and kiss-ins.

Yes to get free education the Chilean students decided that instead of burning the universities down and looting nearby shops, they’d rather dance to thriller while dressed as zombies (worth watching, click here) and then make out. If you’re on one of the South African University SRCs you should take note, it worked. The government fired their education minister because he wasn’t coming up with any decent solutions to their problems, and replaced him with someone who got the job done.

Chile has more in common with South Africa than the students demands for free education. After three decades under a dictatorial regime it became a democracy in 1990. Prior to that if you disagreed with the powers in charge you would have found yourself in prison if you were lucky, or being dropped out of an aeroplane parachuteless if you weren’t.

Since then however Chile has been a complete success story. They’ve cut unemployment all the way down to around 6%, growth has been sitting at around 4% on average, far higher than the 1% growth in population. The streets are now really safe, and even their stray dogs are well fed, really, I’m not kidding on that last one!

In contrast we sit here with a growth rate of under 1%, far lower than the population growth. This is something some economists see as a true recession. Our streets are anything but safe, and sadly our stray dogs are all very skinny while our politicians who seem to become fatter by the day.

So how did Chile get things so right?

Their success is credited mainly to the following:

Not really rocket science. You would imagine even our academically challenged president would be able to understand this, but no, instead we seem to be a breeding ground for death spirals.

If you’re not a pilot or health insurance salesman you might not be familiar with the term death spiral. Basically it’s a bad situation which causes a reaction that makes the situation even worse, which causes more of a reaction making things even worse, until everything pretty much explodes like the when I tried to boil an egg in the microwave last month.

At the moment our government is creating three death spirals:

1) The tax hike spiral
We’re hiking taxes, in a big way. Dividends tax is up not one percent or two, but 5 percent. Then there’s a new tax rate of 45% to pick on the biggest tax payers in South Africa. I’m not one of them sadly, but what I do know is that wealthier people have more options than the poor. Very wealthy people have plenty of options, they can form companies in Panama, or spend 6 months and a day outside of South Africa or even emigrate. This means they could pay no tax in South Africa at all if they really felt the urge, leaving us with far less money in the coffers than the year before.

To counter this the government will raise taxes again. This will scare more high taxpayers away leaving us in a bigger hole needing to raise taxes even more. Eventually we’ll just have nobody left who can afford to pay taxes. It seems inevitable at the moment.

What can you do?
Make sure you take advantage of any tax breaks you can. The one I like most is the tax free savings account. Unlike an RA I’m not scared of what taxes might be one day when I’m 55+ and decide to draw from it, because it’s made with after tax money and will never be taxed again. The limit for this year is also up by 10% to R33 000, so that’s what you should aim for. Then open another for your spouse, and your 2.2 children. A family of four could put away R11 000 a month and never need to pay dividends tax or capital gains tax on it ever again. This is something you can’t catch up when you one day earn more, so make it a priority.

I drove past my local Makro recently. They’ve obviously got smart financial people in their boardroom. Their entire parking lot is covered with panels. As it’s such a good investment I imagine more people and companies will soon do the same. That will mean there are less people to pay for the electricity infrastructure, and Eskom will need to raise their prices at higher than inflation levels again. This will make solar an even better investment causing more people to leave the grid resulting in even higher Eskom prices.

Eventually Eskom power will be so expensive that nobody will want to be on the grid anymore, but instead of seeing this and using foresight to subsidise the poor to be able to put up their own solar, or by allowing those who make more than they use to push it back onto the grid, we’d rather spend trillions on nuclear power stations that won’t be needed when they’re finished. And of course on bonuses to top management. Those shebeens in Saxonwold are pricey you know.

What can you do?
Start educating yourself about the feasibility of putting up your own solar. Even if you can’t take yourself off the grid, reducing the amount of power you need from it could be a fantastic investment. Next time your geyser bursts see if you can stretch your budget to a vacuum tube solar setup. It’ll pay you back for the extra costs many times over, and give you a hot shower when load shedding inevitably returns due to the lack of maintenance funds.

3) The ANC spiral
Yes not all death spirals are bad, this one may just rescue us. A few years ago the ANC kicked Mbeki out of the presidency and the leadership of the ANC. This caused the moral compass of the ANC to go slightly out off course. With it being out of sync bad stuff started happening and more good people were forced out. This made the organisation even less morally sound and more people left. Soon I imagine even more people will jump ship.

Eventually there will only be rats left behind, and the organisation will simply implode. I look forward to it greatly!

What can you do?
Bring out the popcorn and watch the fireworks. They ought to be very entertaining. You might want to look at your investments geographical diversification too. Of course you know better than to have all your eggs in one basket, but I would say it’s even more important to have some baskets in other countries.

And now to the photos I promised